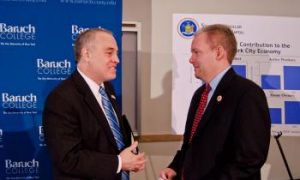 Piracy could be the culprit behind the 7 percent decrease in the record industry’s global music revenue in 2009, according to a recent report by the International Federation of the Phonographic Industry (IFPI).

IFPI reported that the United States and Japan constituted 80 percent of the revenue decline. The rest of the world decreased by 3.2 percent and global physical sales revenue fell by 12.7 percent.

“This is disappointing, but amid the decline there are some very positive points,” Kennedy said. “No fewer than 13 countries saw music sales grow in 2009, including important markets such as Australia, Brazil, South Korea, Sweden, and the U.K. Digital sales in some of those markets rose at very encouraging rates, reflecting the new opportunities of online and mobile channels.”

But end-user piracy continues to loom over record companies and the industry carries no plans of losing to downloaders.

“There is a huge battle ahead, but also signs that the tide of opinion among governments is shifting as piracy's impact on the economy and jobs becomes clear,” Kennedy said.

It shows how determined the industry is to stand and fight for its every record. However, being too persistent on the matter could take a toll on revenue as well.

Some economists like Martin Peitz and Patrick Waelbroeck argued that sampling can convince users to buy the product. Downloading music for free gives consumers the opportunity to sample artists. People have no time limit to decide whether they like the songs on the album and whether they want to support the musician. So eliminating peer-to-peer software or passing tight laws might not be the best solution to increase revenue.

Of course, when millions across the globe download songs and albums, record companies without a doubt will feel the impact—any economist can see this. But consumers don’t buy the music to support a record company. They buy to support the artist, who makes most of his revenue through tours and concerts, rather than record sales.

Despite this, IFPI Chairman Kennedy sees the growth of music business as not being far away, “it depends, to a large extent, on how quickly governments can act to deal with piracy and, in doing so, tackle a market distortion that overshadows not just music but all the creative industries,” he said.

“I think we're just experiencing technology and we just have to pass new laws, eventually, to change how music is being distributed,” 50 Cent told MTV.