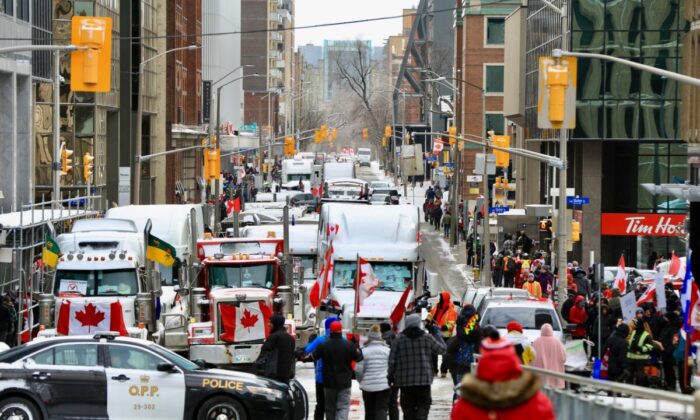 The website for GiveSendGo, the crowdfunding platform used by the Freedom Convoy to fund their protest against COVID-19 mandates and restrictions, has been frozen and appears to have been hacked.

In a series of posts on the night of Feb. 13, a reporter for The Daily Dot, Mikael Thalen, tweeted that the website of GiveSendGo was redirecting to the domain GiveSendGone.wtf.

A clip from the Disney film “Frozen 2” was displayed on the main page briefly with a manifesto scrolling over the video, condemning the platform and the protesting truckers.

As of noon on Feb. 14, a visit to the website shows a blank page that states, “Application is under maintenance we will be back very soon.”

BREAKING: GiveSendGo, the crowdfunding website used by the Freedom Convoy, is now redirecting to the domain GiveSendGone[.]wtf.

A video from the Disney film Frozen now appears alongside a manifesto condemning the website and the Freedom Convoy. pic.twitter.com/3TLAwfvZ3w

At the same time, Thalen said a file “allegedly containing tens of thousands of names of those who donated to the Freedom Convoy has also been leaked,” but had yet to verify it.

Leak site Distributed Denial of Secrets (DDoS) announced on its website that it had 30 megabytes of donor information from GiveSendGo, including names, email addresses, zip codes, and internet protocol addresses.

In June 2020, a U.S. Department of Homeland Security document labelled DDoS a “criminal hacker group” after their hacking operation targeted federal, state, and local law enforcement databases in what officials surmised was in support of nationwide protests after the death of George Floyd.

The Epoch Times reached out to GiveSendGo for comment but did not hear back by publication time.

The freedom convoy started as a demonstration by truck drivers who opposed COVID-19 vaccine mandates for cross-border travel, with convoys driving from various parts of Canada to Ottawa on Jan. 29. Many have stayed in the city, saying they will remain until the government lifts all federal COVID-19 mandates.

The protest has since become a larger movement with supporters across Canada joining in to oppose various COVID-19 mandates and restrictions. It has also sparked parallel protests at border crossings in Alberta, Manitoba, and Ontario.

The convoy’s organizers initially set up a fundraiser to supply truckers with food, fuel, and lodging through the platform GoFundMe. By Feb. 1, the fundraiser had received more than $10 million in donations, the second-largest ever in Canada.

As of Feb. 2, GoFundMe had released $1 million to the organizers, though the personal account that money was distributed to was later frozen by Toronto-Dominion Bank. On Feb. 4, GoFundMe said it would stop payments and forward the money to other charities instead, before changing course again on Feb. 5, announcing it would automatically reimburse the funds to donors.

Following GoFundMe’s announcements, the protest convoy organizers set up a new campaign on GiveSendGo. By Feb. 10, “Freedom Convoy 2022” garnered $US8.4 million and “Adopt-a-Trucker” raised more than $686,000 on the new platform.

The Ontario government later successfully sought a court order on Feb. 10, to freeze all donations made to the protesting truckers on GiveSendGo.

“Today, the Attorney General brought an application in the Superior Court of Justice for an order pursuant to section 490.8 of the Criminal Code prohibiting any person from disposing of, or otherwise dealing with, in any manner whatsoever, any and all monetary donations made through the Freedom Convoy 2022 and Adopt-a-Trucker campaign pages on the GiveSendGo online fundraising platform,” said a statement released by Premier Doug Ford’s office on Feb. 10.

“This afternoon, the order was issued. It binds any and all parties with possession or control over these donations.”

In a statement on Feb. 13,  convoy organizers said “none of the money” donated to the group through either GoFundMe or GiveSendGo has been accessible to the group to date.

“Truckers on the ground have resorted to raising donations from the droves of people coming into Ottawa on a daily basis,” said the statement.

“It is an incredible testament to the truckers’ strength of resolve to see them undeterred and determined to continue holding the line, despite the financial hurdles the government continues to throw at them.”

The Canadian Press, Reuters, and Mimi Nguyen Ly contributed to this report