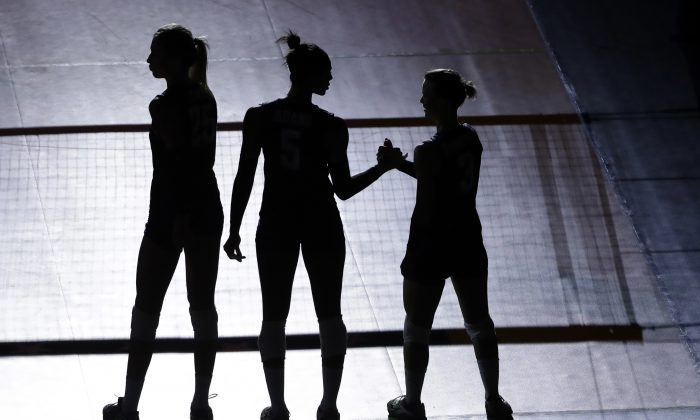 A number of girls playing for a high school volleyball team in Vermont have been barred from using their own locker room after filing a complaint to school officials about a transgender teammate, according to a report.

Blake Allen, who, along with some of her fellow teammates, now has to get changed in a single-stall bathroom, told WCAX-TV that the dispute started after the transgender player at Randolph Union High School made an “inappropriate comment” to some of the girls while they were changing in the locker room.

Allen noted that she’s not the only girl who has raised these concerns. Some parents have also approached school officials to inform them how uncomfortable it makes them feel that a biological male is changing with their daughter.

“There are biological boys that go into the girl’s bathroom, but never a locker room,” Allen said.

The girls and parents who’ve raised the issue want the school to relocate the transgender athlete, but officials have instead advised the group of girls to find another room to change.

“They want all the girls who feel uncomfortable—so pretty much 10 girls—to get changed in a single-stall bathroom, which would take over 30 minutes. Where if one person got changed separately, it would take a minute, like no extra time,” Allen argued.

In an emailed statement responding to the families of affected players, school officials stated that there’s “plenty of space where students who feel uncomfortable with the laws may change in privacy,” WCAX-TV reported.

According to Vermont’s state law, students can play sports and use the locker room that correspond to the gender with which they identify.

Meanwhile, the school reportedly sent out a second email to inform parents that they’ve launched an investigation over allegations that the girls harassed the transgender student.

Allen said during the interview with WCAX-TV that the incident is “a huge thing” many students are talking about.

“Everyone’s asking, ‘So, why aren’t you allowed in the locker room?'” said Allen, adding that her mother advised her to do an interview with the network in an attempt to change the situation.

“I feel like for stating my opinion—that I don’t want a biological man changing with me—that I should not have harassment charges or bullying charges. They should all be dropped,” she said.

Lisa Floyd, Randolph High School co-president, told the network in an email that when policies are violated, disciplinary action consistent with the school’s rules will be applied, adding that students’ safety is the “district’s top priority.”

The state’s education agency policy states that the “use of restrooms and locker rooms by transgender students requires schools to consider numerous factors,” while also noting that a “transgender student should not be required to use a locker room or restroom that conflicts with the student’s gender identity.”

Keeping a campaign promise President Joe Biden made to the LGBT community, his administration has issued new laws that have pressured some schools into adopting policies that give transgender students the right to use preferred pronouns, school bathrooms, and locker rooms, among other things.

The new rules have been welcomed by activists for transgenderism, but critics argue it erodes protections for women and girls, who are mostly affected negatively by this hot-button issue.

Swimmer Lia Thomas, a biological male who identifies as a woman, sparked outcry over unfairness after becoming the first transgender NCAA champion in women’s Division I history by winning the women’s 500-yard freestyle earlier this year. The win drew significant backlash from female swimmers, activists, and other athletes, including Thomas’s teammates.