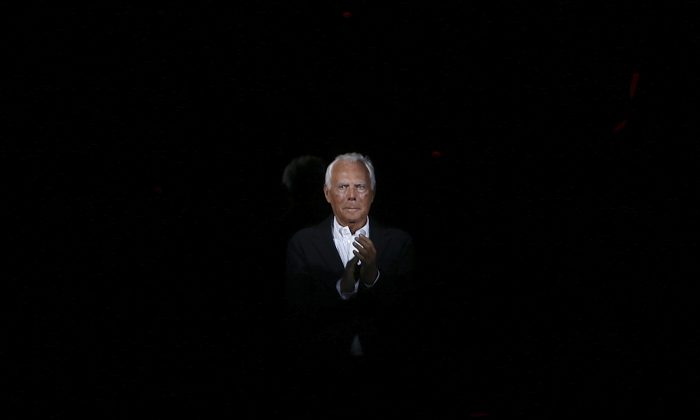 With 3,000 employees, 2,473 points of sale, seven different fashion and furniture labels (to say nothing of his makeup, skincare, chocolate and flower lines), 16 cafés and restaurants, two hotels, a basketball team and revenue of 2.19 billion euros, Giorgio Armani had much to celebrate on his 80th birthday.

Those numbers would delight the craven desires of any bottom line-obsessed fashion industrialist more focused on corporate ledgers than the principles of inspired design. But in the case of Armani, the self-made sole owner of one of the world’s largest fashion empires, these numbers symbolise an impressive history and unprecedented legacy built on one man’s hard work, determination and aesthetic rigour.

They underscore his unprecedented contribution to an often-shaky Italian economy as well as the staying power of the Made in Italy label (itself under threat from Chinese manufacture).

The latest Giorgio Armani men’s collection was aptly titled Echoes of Armani. Many fashion journalists somehow detected a wistful note in a summer effort that, while certainly possessing all the classic Armani elements, was far from nostalgic.

The collection was Armani at his best. It showcased fluid-yet-flattering jackets, shirts so exquisite ties need not apply for work, trousers that caressed a well toned body without ever veering into vulgarity. Nothing innovative, to be sure, but an important renewal of the designer’s commitment to the core principles on which he’s built an empire: comfort, luxury, elegance and graceful ease.

Echoes can be heard long after their inception and their reverberations can be felt far and wide. If the menswear collections in Milan this season were any indication, then Armani’s influence was palpable and omnipresent, once again, well beyond his Tadao Ando designed minimalist concrete, softly illuminated staging facility in via Bergognone. His influence, especially in men’s wear, is by all accounts unrivalled, and easily taken for granted in a world where elegance is no longer the main criterion for design.

A failed medical doctor and by his own admission a closeted architect, Armani never trained in the typical manner. Taking up various positions at the eponymous La Rinascente department store in Milan, followed by a stint in the textile mills of Nino Cerruti (where he also designed its Hitman menswear line), Armani quickly learned the importance of quality textiles and the full range of issues that determine the life, brand and image of a fashion house.

Setting out on his own at the age of 40, spurred on by his then partner in life and business Sergio Galeotti, Armani is one of the very few designers who remains entirely in control, both financially and aesthetically, of his house.

Only ten years after founding the company, Galeotti died prematurely. Since then, Armani has been plagued every season, almost without fail, with questions from the press about the future of the company and of his retirement links. It might be worth pointing out that his near contemporary Ralph Lauren (74) and Karl Lagerfeld (80) have never had to endure the same degree of questioning.

Faced with the loss of his dearest friend and co-founder, Armani not only demonstrated his resilience, but also proved to the world that his design acumen could be translated to marketing, management and retail innovation.

Armani’s working-class childhood in Piacenza, Northern Italy, clearly taught him the importance of hard work. Beyond the splendid sartorial propositions or red carpet confections he manages to create season after season, vaulting celebrities into the ranks of the best-dressed lists time after time, Armani will surely always stand for aesthetic rigour, determination, steadfast vision and above all else hard work.

A milestone such as an 80th birthday is a prompt to pause and take stock of the past, or to ponder the possibilities of the future. But the two are not mutually exclusive, even within the fashion industry. As Giorgio Armani the man turns 80 and Giorgio Armani the house prepares to turn 40 in July 2015, we should all stop to pay tribute to an incredible life’s work. It is a time for celebration, and Armani is certainly fit enough to dance up a storm.

John Potvin does not work for, consult to, own shares in or receive funding from any company or organisation that would benefit from this article, and has no relevant affiliations. This article was originally published on The Conversation. Read the original article.