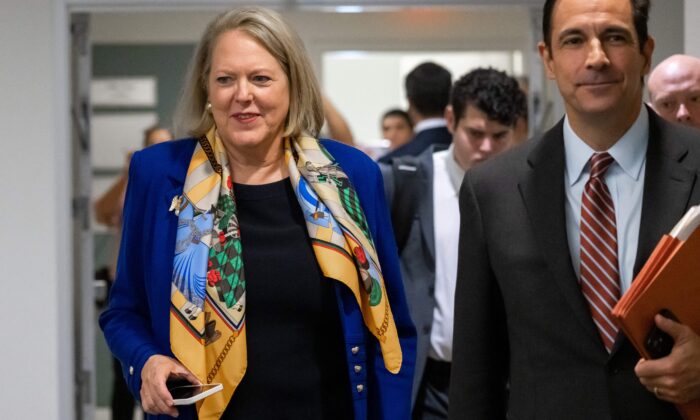 Ginni Thomas, wife of Supreme Court Justice Clarence Thomas, walks to a meeting with the House Jan. 6 Committee, in Washington on Sept. 29, 2022. (Saul Loeb/AFP via Getty Images)
By Emily Miller

Ginni Thomas, the wife of Supreme Court Justice Clarence Thomas, told the House of Representatives committee investigating the U.S. Capitol breach that she has not influenced her husband’s judicial decisions.

Near the end of her opening statement to the panel on Sept. 29, Thomas said that “it is laughable for anyone who knows my husband to think I could influence his jurisprudence—the man is independent and stubborn, with strong character traits of independence and integrity.”

The Epoch Times obtained the statement on Thursday evening.  Ginni Thomas testified in the morning until early afternoon and answered all the questions asked of her by members of the committee, according to sources in the room. The January 6 House committee members are all Democrats, except Reps. Liz Cheney (R-Wyo.) and Adam Kinzinger (R-Ill.), both of whom participated by Zoom, according to a source familiar with the proceedings.

Political activists have been urging lawmakers to impeach Justice Thomas, a George H.W. Bush appointee and the oldest member on the court, because of the actions of his wife following the 2020 presidential election. A moveon.org petition created to “Impeach Clarence Thomas” has 1.2 million signatures, with the author saying that Ginni Thomas “was actively urging the White House to overturn election results,” which leaves the justice with “conflicts of interest.”

Text messages made public by news outlets and not disputed by Ginni Thomas show that after the 2020 election, she discussed claims of election fraud, including the claim that watermarked ballots were used in over a dozen states by Trump and the military as a “white hat sting operation,” or an operation designed to ensnare fraudsters. “Do not concede,” she said in a message on Nov. 6, 2021.

The texts were sent to Mark Meadows, the White House chief of staff at the time.

However, Thomas said in her opening statement that her “post-election” activities were “minimal.” She testified that she did not speak with her husband “about any of the legal challenges to the 2020 election, as I was not involved with those challenges in any way.”

Rep. Pete Aguilar (D-Calif.), a member of the panel, told reporters in Washington that members wanted to ask Ginni Thomas about her discussions with Meadows as well as with lawyer John Eastman, one of the scholars who believed then-Vice President Mike Pence could reject electoral votes from certain states. Pence disagreed.

Ginni Thomas told members of the panel that her husband was “completely unaware” of the texts she sent to Meadows until they were published by news outlets while Justice Thomas was in the hospital. She said the committee was the source of the texts.

Ginni Thomas told members that her husband’s work is not “within the scope of this committee’s jurisdiction.” She said that her husband has never spoken with her about cases pending before the court, calling that “an ironclad rule in our home.” She also said that he is “uninterested in politics.”

“I generally do not discuss with him my day-to-day work in politics, the topics I am working on, who I am calling, emailing, texting, or meeting,” she added.

Full Statement of Ginni Thomas to the J6 Committee:

First, I want to thank the Committee for your patience as I recovered from hip replacement surgery.

Second, I am here voluntarily to answer questions about my activities regarding the 2020 election, which, I think you will find, were minimal and mainstream.

However, as my counsel has expressed, I am concerned that there may be more than a few questions about my husband’s work, which I do not believe is within the scope of this committee’s jurisdiction.

Since I was the Nebraska College Republican Chair in my twenties, long before I met my husband in 1986, I have been active in political/public policy work.

As Justice Breyer said this last week, it is 2022 and women can have professional and separate careers from their judicial spouses.

Since he became a judge in 1990, my husband has only worked in the legal arena, not politics.

I can guarantee that my husband has never spoken with me about pending cases at the Court. It’s an iron clad rule in our home.

Additionally, he is uninterested in politics. And I generally do not discuss with him my day-to-day work in politics, the topics I am working on, who I am calling, emailing, texting, or meeting.

And I know he was completely unaware of my texts with Mark Meadows until this Committee leaked them to the press while he was in a hospital bed fighting an infection.

Let me also add, it is laughable for anyone who knows my husband to think I could influence his jurisprudence—the man is independent and stubborn, with strong character traits of independence and integrity.

I am now happy to answer questions.