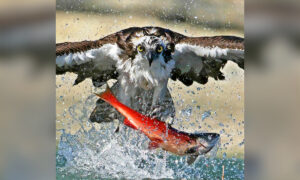 Gigantic Cow Called ‘Knickers’ Weighs More Than a Car, Is as Tall as Michael Jordan

A gigantic steer that some consider the largest in Australia has become a viral sensation.

The cow is named “Knickers” and stands at 76 inches at the shoulder, towering over other cows, its owner said, adding that the cow almost as tall as Michael Jordan. It weighs about 3,086 pounds and lives on a farm in Myalup, located 85 miles south of Perth, Australia.

Knickers was neutered when he was young, and was raised to steer weaning cows or bulls that have recently weaned off their mothers.

As a steering bull, Knickers just needs to be pointed in the right direction in order to steer the cows to where the owners might want them. The cows are naturally attracted to him, it seems. They just follow Knickers like a crowd.

Geoff Pearson, the owner said Knickers was bought as a “coach,” which is a steer that leads other cattle when it was about 12 months old.

Pearson told ABC that other cows still follow him around. “You’ll put him in a paddock and all the other cattle seem to get attracted to him,” Pearson said.

And spending that kind of time with recently weaned cows and bulls, Knickers has the added benefit of eating whatever the weaning cows have had to eat.

And for a massive steer, comes the equally grand appetite. Pearson said that every day, Knickers eats 70 pounds of natural green pasture and cereal grain.

Knickers was always a little bit bigger than the rest, Pearson thought to keep the steer because of its potential to be big, never expecting that Knickers would become the towering giant that he is.

And there’s a chance that he will still grow.

“It’s quite daunting being up close to him, he’s far bigger than any other steer I’ve had. But he’s very placid, not aggressive, just inquisitive.”

It’s no longer just the other cows that are attracted to Knickers, but since Knicker’s rise in fame, people all around the world have been speaking out about their fondness for the giant Australian steer.

Spared From the Grinder

Pearson tried to auction Knickers in October, but meat processors said they couldn’t handle the size.

“He was always a standout steer from the others, a bit bigger than the rest,” he explained, adding that “some of his mates” were slaughtered at an early age. But Knickers “was still a standout so we thought let’s leave him there, he’s not hurting anyone,” he said.

Now, as Knickers lives on in the farm, unfit for processing in the slaughterhouse, he gets to spend the time in Pearson’s feedlot, surrounded by other cows.

The Type of Breed

Knickers is a Holstein-Friesian, a dairy breed known for being quite tall, according to an industry website about the animals. “Holsteins are most quickly recognized by their distinctive color markings and outstanding milk production. Holsteins are large cattle with color patterns of black and white or red and white,” it says.

On average, Holsteins weigh about 1,500 pounds and are 58 inches tall at the shoulder.

Margaret River veterinarian Rupert Mothersole told ABC that he has never seen a cow as large as Knickers, but he stated it’s not unusual for Holstein-Friesian to grow to that size.

“We’ve seen, over the last 30 to 40 years, quite a considerable increase in the average size of the cow,” he said. “Obviously the bulls and the steers are also going to grow larger as we select larger genetics.”

Mothersole added that steer are more likely to grow taller.

“If we castrate them young then basically we’re not going to have the influence of those hormones,” Pearson said. “We’re going to find that the growth plates, which cause the bone plates to continue to grow, are going to stay open for much longer and that’s going to give you a much more leggy, taller animal.”

The Origin of the Name

“When he was young, when we first got him, we had a Brahman steer [a breed of cattle] which was a friend of his,” he said. “So his name was bra… so we [had] bra and knickers.

He added: “We never thought he would turn into a big knickers.”

But despite towering at 76 inches, Knickers isn’t the biggest Holstein—a Canadian man had said that his steer, Dozer, is among the largest in the world, towering at 77 inches, just a mere inch bigger than Knickers.

In August 2014, a 74 inch American Holstein, was dubbed the world’s tallest cow, but it died a year later, ABC noted.

Weeks after pictures of Knickers had gone viral, university researchers might have just found the world’s smallest cow. Lil’ Bill, who weighs around 9 pounds at birth, is about the same size as a cat. A premature calf, Lil’ Bill is far lighter than a regular calf, which weighs around 50-80 pounds at birth.

Lil’ Bill has taken the internet by storm and is capturing our hearts along the way. Here’s some behind the scenes footage of the amazing bull and the MSU veterinarian who works with staff and students to nurse him back to health. #WeRingTrue

The university’s website said that the tiny calf was delivered on Oct. 27, and vets believe that the calf is a month premature. However, despite the irregularities, people are expressing their love for the tiny calf and is gaining popularity due to its small size.

Lil’ Bill has also received thousands of likes and share on Facebook, as well as comments wishing the little calf to be able to make it as a healthy cow.