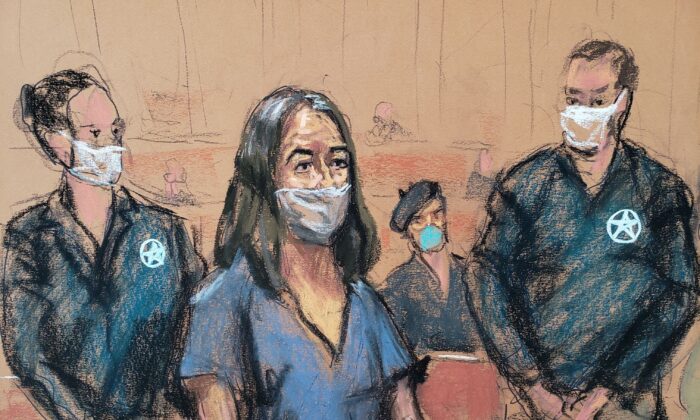 Maxwell, 59, entered her plea through her lawyer before U.S. District Judge Alison Nathan in Manhattan.

The charges had been included in an eight-count indictment unveiled on March 29. It was the first time Maxwell had faced a judge in person since her arrest last July.

Maxwell previously pleaded not guilty to charges she helped Epstein recruit and groom three other girls for him to sexually abuse from 1994 to 1997, and committed perjury.

Epstein, 66, killed himself in a Manhattan jail in August 2019, one month after being arrested on sex trafficking charges.

Maxwell’s trial remains scheduled for July 12 provided a courtroom is available, but her lawyers are seeking a months-long delay because of the new charges, a request prosecutors oppose.

Nathan has not decided whether to delay the trial, but said she wants to start as close as possible to July 12 if there were no delay.

Maxwell faces up to 80 years in prison if convicted on all charges.

The two perjury counts would be handled separately in a second trial.

Friday’s hearing marked the first time Maxwell has publicly appeared in person since her arrest last July at her home in New Hampshire.

Prosecutors said she had been hiding out, while Maxwell’s lawyers said she moved there to escape incessant negative media publicity. Since her arrest, she has been jailed in Brooklyn.

Maxwell wore a loose-fitting, blue short-sleeve shirt and white face mask, with her dark hair reaching below her shoulders. Her older sister, Isabel Maxwell, attended the hearing. Maxwell had appeared by video for her prior arraignment.

Lawyers for Maxwell have complained that she has suffered from weight and hair loss in jail, which prosecutors have denied.

On Monday, Maxwell’s lawyers are expected to argue before the federal appeals court in Manhattan that the third bail denial should be overturned.

In seeking a trial delay, Maxwell’s lawyers cited the “voluminous” amounts of evidence, blamed prosecutors for being too slow to turn over materials, and said jail restrictions have impeded Maxwell from preparing her defense.

The lawyers have also repeatedly cast doubt on whether their client can even get a fair trial, faulting the media for treating her as a “monster” because of the “Epstein effect.”

Prosecutors have pledged to make “significant efforts” to ensure that Maxwell was prepared for a July trial.

They also said a delay would also harm the four alleged victims, saying two have reported significant stress from the case and expressed a desire to go to trial.

“Everybody felt that they were cheated by Mr. Epstein’s death,” David Boies, a lawyer for some of Epstein’s and Maxwell’s accusers, said after the arraignment.

“Now that Miss Maxwell is going to go to trial,” he added, “I think that is something that they’re looking forward to.”

Even if no delay were granted, a July 12 start is not assured.

Only seven courtrooms in the Manhattan courthouse have been reconfigured for the COVID-19 pandemic to accommodate jury trials, according to a court spokesman.

Jailed defendants in criminal cases get higher priority for jury trials, but some defendants are ahead of Maxwell.

By Jonathan Stempel and Karen Freifeld