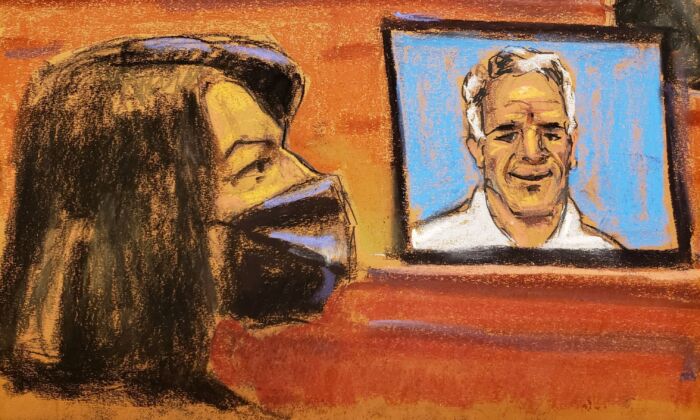 Ghislaine Maxwell, the Jeffrey Epstein associate accused of sex trafficking, attends her trial near an image of Epstein on a screen in a courtroom sketch in New York City, N.Y., on Dec. 2, 2021. (Jane Rosenberg/Reuters)
By Dave Paone

NEW YORK—In a June 25 letter to Judge Alison Nathan, one of Ghislaine Maxwell’s defense attorneys, Bobbi Sternheim, informed the court that Maxwell was placed on suicide watch yesterday by the Manhattan Detention Center (MDC), and that this “recent development” may “require postponement of Tuesday’s sentencing proceeding.”

The attorney stated that this was done “without having conducted a psychological evaluation and without justification.”

She went on to say, “Ms. Maxwell was abruptly removed from general population and returned to solitary confinement, this time without any clothing, toothpaste, soap, legal papers, etc. She was provided a ′suicide smock′ and is given a few sheets of toilet paper on request. This morning, a psychologist evaluated Ms. Maxwell and determined she is not suicidal.”

Sternheim wrote she met with Maxwell today and has determined herself that Maxwell is not suicidal.

She ended the letter with, “Currently, she is unable to prepare for sentencing. If Ms. Maxwell remains on suicide watch, is prohibited from reviewing legal materials prior to sentencing, becomes sleep deprived, and is denied sufficient time to meet with and confer with counsel, we will be formally moving on Monday for an adjournment.”

On June 15, the defense filed a 36-page memorandum that essentially asks Nathan to go easy on their client.

For much of the 36 pages, the defense puts the blame on the now-deceased Jeffrey Epstein, who was Maxwell’s employer and romantic partner, referring to him as the “central figure,” “mastermind,” and “principal abuser.”

Epstein died in his jail cell with the official cause of death being suicide by hanging.

Over the past week and a half, attorneys on both sides have been petitioning Nathan regarding the “impact statements” that some of Maxwell’s alleged victims may read at the June 28 sentencing. The Crime Victims’ Rights Act allows such statements to be delivered to the court on sentencing days.

In another recent development, Virginia Giuffre, one of the alleged victims who did not testify in the trial but intends to speak at the sentencing, is involved in a civil lawsuit against Harvard Law Professor Alan Dershowitz. Dershowitz’s lawyers also sent letters to Nathan this week asking to have the civil lawsuit unsealed if Giuffre is to speak.

Maxwell was found guilty of five of six counts of sex trafficking in connection with Epstein on Dec. 29, after a month-long trial in federal court in New York.