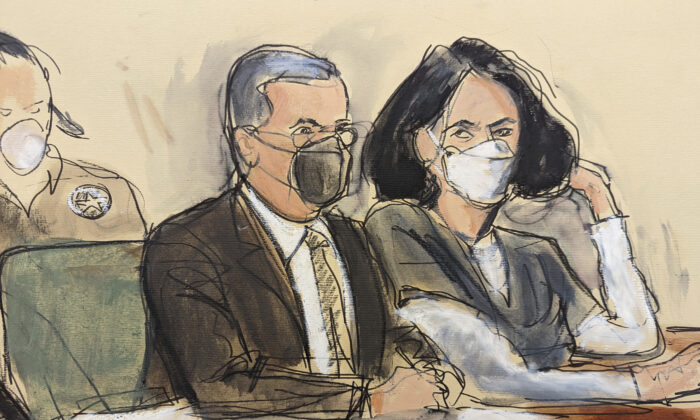 In this courtroom sketch, Ghislaine Maxwell (R) is seated beside her attorney Christian Everdell as they watch the prosecutor speak during her sentencing, on June 28, 2022, in New York. (AP Photo/Elizabeth Williams)
By Dave Paone

NEW YORK—Convicted sex trafficker Ghislaine Maxwell has filed an appeal of both her conviction and sentence.

Maxwell was found guilty in federal court for her role in trafficking young women for the sexual pleasure of her employer and one-time romantic partner, Jeffrey Epstein.

In December, Maxwell was convicted on five counts of sex trafficking, including one count involving a minor. On June 28, she was sentenced to 20 years in prison and fined $750,000.

On July 7, attorney Bobbi Sternheim filed a two-page notice of appeal with the court and paid the $505 docketing fee.

Presiding Judge Alison Nathan had advised the 60-year-old Maxwell of her right to appeal before she handed down the sentence.

Immediately afterward, some people expressed outrage at such a short sentence, compared to how many years of abuse her victims had suffered.

There has also been a public demand for Maxwell to release the names of Epstein’s friends—supposedly famous and powerful men—who took part in the abuse.

In her victim impact statement read at the sentencing, Sarah Ransome referenced those men.

“I became, against my will, nothing more than a sex toy with a heartbeat and a soul for the entertainment of Epstein, Maxwell, and others,” Ransome said. “I was subjected to sexual predation multiple times per day, both in his New York mansion and on his private island in the U.S. Virgin Islands.

Later on, she said, “Soon after lulling me and others into a false sense of security and comfort, they pounced, ensnaring us in their upside-down, twisted world of rape, rape, and rape.”

At the sentencing, Nathan also gave Maxwell the opportunity to speak. She stood with two female U.S. Marshals with her.

Speaking about her victims, she said, “I want to acknowledge their suffering,” and “I empathize deeply with all the victims in this case.”

“It is the greatest regret of my life that I ever met Jeffrey Epstein,” she said, calling him “a manipulative and controlling man.”

Maxwell then turned to her victims.

“May this day help you travel through the darkness into the light,” she said.

At the end of the sentencing, Sternheim requested that Maxwell be relocated to the Federal Correctional Institution in Danbury, Connecticut, from the Manhattan Detention Center.