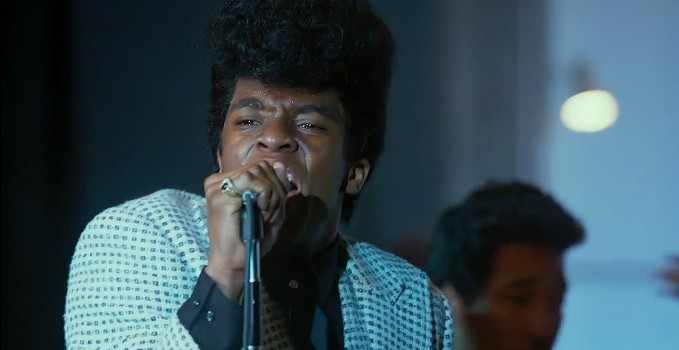 GET ON UP: A Rousing Tribute To The Godfather Of Soul – James Brown (Film Review)

Legendary R&B superstar James Brown died at the age of 73 on Christmas day 2006. A mere seven years later a group of producers including Brian Glazer and legendary rock star Mick Jagger (executive producer) paid an extraordinary tribute to Brown via a film biography worthy of Oscar recognition.  That biopic is Get On Up.

Penned for the screen by Jez and John-Henry Butterworth, and highlighted by an absolutely astounding performance from Chadwick Boseman (who also portrayed Jackie Robinson in last years film 42), Get On Up chronicles James Brown’s rise to fame from the depths of extreme poverty. Brown was born in Barnwell, South Carolina in 1933 in the midst of The Great Depression. He was born to Susie and James Brown Sr. and raised in a backwoods shack. His mother Susie, portrayed in the film by Viola Davis, fled her abusive husband, leaving young James behind. Later James Sr. as well ditches young James to join the military.

Get On Up skillfully flashes back and forth between Brown’s childhood years where he was eventually raised in a brothel by a loving Aunt who was also the madam of the establishment, to his early pre-fame years with Bobby Byrd and their group The Famous Flames, to his thriving and then waning years circa 1960 to 1988. While the flashbacks were rendered often enough throughout this production they were somehow pulled off without being excessively choppy or chafing.

Directed by Tate Taylor ( The Help and Winter’s Bone) Boseman in the lead as Brown delivers a powerhouse performance to be reckoned with. One must wonder if he summoned the heavens to actually channel Brown. From the walk, to the dance moves, to Brown’s overall effervescent swagger, Boseman so profoundly transforms himself into the legendary soul music showman that he captivates the audience and handily commands their attention for the entire length of this 2 hour and 20 minute production.

James Brown enthusiasts will more importantly highlight and make references to Boseman’s uncanny vocal resemblance to the real James Brown. While this production makes it absolutely clear that Brown was innately intelligent (a brilliant businessman), his public education ceased by the age of 12 and Brown was never known to be an articulate speaker. Boseman so keenly taps into the essence Brown’s dialect that for a moment or two one may wonder if it’s actually Boseman’s voice at all. Of course it is. But the accuracy is utterly staggering.

It is first and foremost Boseman’s performance and surreal transformation into Brown that illuminates this production. It’s now hard to imagine anyone else in the role. That being said, the producton is as well highlighted by performances from her thespian-highness Viola Davis who dominates every small scene that she graces the screen with in this film. While Davis has been in the running for an Academy Award in the past, she has yet to garner the coveted honor. She is certainly worthy again for her supporting role as Brown’s mother Susie, and perhaps this role will serve as a conduit to an Oscar win this time around.

Nelsan Ellis (The Help and True Blood) delivers a believable performance as James Brown’s long time friend and humble stage partner Bobby Byrd. Byrd, while talented in his own right, made a career standing in the shadow of Brown’s more evident glory.

Neo Soul singer turned actress Jill Scott also delivers a delightful performances as Brown’s spirited wife Dee Dee, and Dan Ackroyd stars in a supporting role as Browns long-time agent Ben Bart who recognized from the onset that James Brown alone was the real act with or without The Famous Flames.

Not to be dismissed is Oscar-Winner Octavia Spencer (Tate Taylor’s The Help) who serves in a very small supporting role as Brown’s Aunt Honey, and funny-man Craig Robinson who also co-stars in a very small role as another long-time James Brown background man – noted saxophonist Maceo Parker.

While Tate Taylor has a number of critical successes under his belt, Get On Up is certain to land him in the film industry annals of  in-demand A-List directors.

Brown opened to introduce the group The Rolling Stones

Get On Up is nearly two and a half hours of sheer entertainment. It’s chock full of full length audience pleasing stage performances of Brown’s most celebrated R&B tunes as well as his soul-stirring ballads like Try Me and Please, Please, Please. Taylor and the Get On Up producers did not forget the music of James Brown, as indeed it was the music that (in spite of his captivating flamboyance) made James Brown… James Brown. It’s an R&B concert fashioned and married into a film biography, and this is where the production finds its ultimate niche.

Executive produced by rock and roll legend Mick Jagger, Get On Up serves as a tribute to Brown via the superstars who came after him and acknowledge his influence on their music and stage performances.

Rated PG-13, Get On Up provides an opportunity for younger audiences to experience the genius of James Brown and the James Brown sound that can ultimately be found in every aspect of today’s most celebrated pop music entertainers from The Rolling Stones, to Michael Jackson and Justin Bieber, to Usher and Chris Brown.

There isn’t a dull moment in this film. Get On Up is an utterly moving and uplifting tribute to the late King / Godfather of soul music.

Five out of five stars.