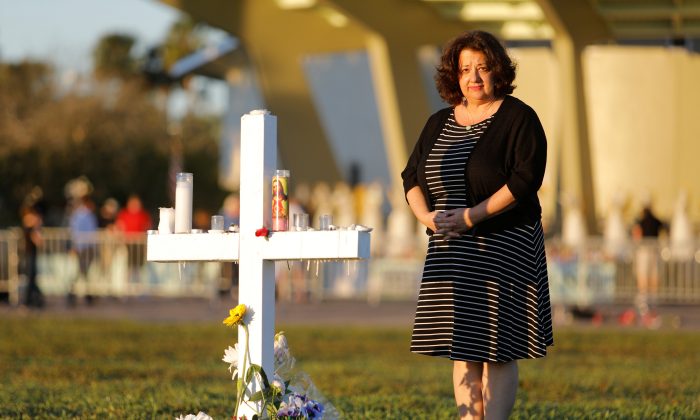 Diana Haneski, a librarian at Marjory Stoneman Douglas High School, poses for a portrait near one of the crosses erected for the victims of the school shooting in Parkland, Florida, U.S. February 16, 2018. (Reuters/Jonathan Drake)
Crime and Incidents

‘Get Back in Here!’ Sandy Hook Lessons Spared Lives in Florida Shooting

As soon as she heard “Code Red Lockdown” on her radio in a Florida high school library, Diana Haneski remembered how a fellow librarian saved lives by locking 22 people in a supply closet during the massacre at Sandy Hook Elementary School.

“She was there that day in Sandy Hook and because of her I knew what to do,” said Haneski, 57, a library media specialist at Marjory Stoneman Douglas High School in Parkland, Florida, where a former student is charged with shooting dead 17 people on Wednesday.

Her longtime friend Yvonne Cech, 58, was the librarian on duty at the Newtown, Connecticut school five years ago when a gunman, also a former student, massacred 20 children and six adults. Cech crammed 18 children and four adults into a small closet and locked the door as gunshots rang out.

“People said to me: ‘What an incredible coincidence that you have such a close friend who could have the same experience’,” Cech told Reuters. “I feel angry that anyone had to experience that horror.”

Drawing from her friend’s account five years ago of how she saved lives, Haneski quickly herded 50 students and five adults into a media equipment room in the rear of the library and locked the doors. The radio crackled with news that there was a gunman on the loose.

Some teachers thought it was simply a drill because school staff had just undergone “active shooter” training and were told a mock incident would take place, Haneski said. One teacher who climbed over the dead and wounded lying in the hallways assumed they were theater students drenched in fake blood, she added.

“I felt right away this was real,” she said.

She told everyone to sit the floor and hide behind something, equipment carts or large stacks of paper, and she covered a window and turned off the lights.

“I could see between the door and the floor. I could see if the bad guy—the shooter—walked past,” she said. “At first it was just lockdown then right away we heard ‘shooting’. We heard his name.”

Nikolas Cruz, the accused 19-year-old gunman, was a student she had known since her previous job at the nearby middle school.

“He was a troubled child,” she recalled.

Haneski and Cech, who each have two adult children, said the only way to stop such massacres was for Congress to tighten gun control laws.

“Unless the laws change, we’re all going to be having this experience at some point,” Cech said.

Haneski agreed: “We did everything we were trained to do. And still this happened. And still 17 didn’t go home after school.”