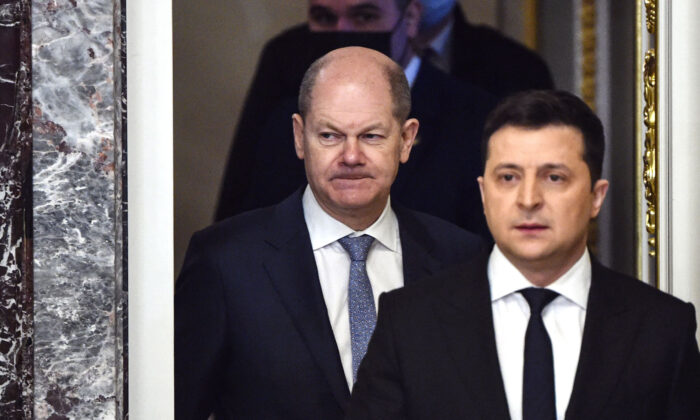 “The Russian attack marks a turning point. It is our duty to do our best to help Ukraine defend against the invading army of Putin. That’s why we’re supplying 1,000 anti-tank weapons and 500 Stinger missiles to our friends in Ukraine,” he wrote in a Twitter post.

This is a major reversal of Berlin’s longstanding policy of banning weapon exports to battle zones.

The batch of weapons included 400 RPGs from the Netherlands and old GDR howitzers from Estonia.

Germany has a long-standing policy of not exporting weapons to war zones, rooted partly in its bloody 20th-century history and resulting pacifism. Countries aiming to pass on German weapons exports need to apply for approval in Berlin first.

Scholz had repeatedly referred to this policy in recent weeks when refusing to deliver weapons to Ukraine.

As the Russian invasion of Ukraine is entering the third day, fighting broke out at the outskirts of the Ukrainian capital city Kyiv, which is regarded as the primary goal of the Russian forces.

U.S. and UK officials said the Russian forces were about 18 miles, or 30 kilometers, from the city center.

The speed of the advance has been slowed “likely as a result of acute logistical difficulties and strong Ukrainian resistance”, the UK’s Ministry of Defense said.

However, a Pentagon official warned the situation may change rapidly.

“It’s a battlefield and events on the battlefield are dynamic and they can change very, very quickly,” the official said.

The UK is sending defensive military aid to Ukraine and said it trained 22,000 Ukrainian troops.

He refused to leave Kyiv, rebuffing a U.S. offer of evacuation and urging Ukrainians to fight.

“We will not lay down our weapons. We will defend our country. Our weapons are our strength. This is our land. Our country. Our children. We will protect all of them,” Zelensky said in a video posted to social media.

Ukraine’s Ministry of Defense urged the citizens to do whatever they can to slow down the Russians, including removing signs with numbers and names of the streets, cities, and villages in their regions.

“Let’s do everything possible to get rid of Russian occupiers from Ukraine as soon as possible,” the ministry wrote in a Twitter post.