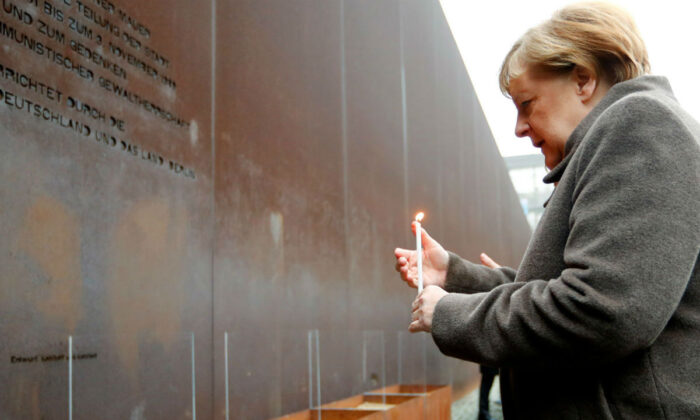 German Chancellor Angela Merkel lights a candle at the memorial of the divided city and the victims of communist tyranny during a ceremony marking the 30th anniversary of the fall of the Berlin Wall at the Wall memorial on Bernauer Strasse in Berlin, Germany on Nov. 9, 2019. (Fabrizio Bensch/Reuters)
Europe

Germany’s President Frank-Walter Steinmeier and Chancellor Angela Merkel, joined by the presidents of Poland, Slovakia, the Czech Republic, and Hungary celebrated on Nov. 9 the 30th anniversary of the fall of the Berlin Wall that divided the Communist-ruled East and capitalist West in Berlin.

All leaders attended ceremonies at the Wall memorial site at Bernauer Strasse where one of the last parts of the Berlin Wall was preserved. The leaders and people attending the event placed roses on the once-fearsome barrier that divided the city for 28 years.

At a memorial service inside the Chapel of Reconciliation located on the former Berlin Wall border strip, Merkel paid tribute to those who were killed or imprisoned during the Communist dictatorship. Merkel noted the cruelty of the East German regime–which had torn down a church on the former death strip site so snipers could get a better shot at people fleeing to the West.

In a statement issued by his office, U.S. President Donald Trump congratulated Germany on its anniversary, saying that “courageous men and women from both East and West Germany united to tear down a wall that stood as a symbol of oppression and failed socialism for more than a quarter of a century.”

“The United States and our allies and partners remain steadfast in our unwavering allegiance to advancing the principles of individual liberty and freedom that have sustained peace and spawned unparalleled prosperity,” he added.

In the evening, German President Steinmeier participated in the celebrations at Brandenburg Gate, where he delivered an address marking the anniversary of the fall of the Wall.

In their remarks, both Steinmeier and Merkel thanked the Visegrad states for the role they played in the events that led to the fall of the Berlin Wall.

The Visegrad group is a regional alliance of four European Union countries; Poland, Slovakia, Czechia, and Hungary for political, cultural, and environmental cooperation. It was named after the Hungarian town where, at the beginning of 14th century, the kings of Bohemia, Hungary, and Poland convened to discuss mutual cooperation.

Steinmeier said “the Wall did not simply fall by itself,” praising “the courageous citizens of the GDR (German Democratic Republic in East Germany), [who] wrote history.”

He remembered people in Poland, Hungary, Czechia, and Slovakia whose “courage was an inspiration to people in East Germany.”

Steinmeier also mentioned Mikhail Gorbachev who “had set a new course in Moscow, a policy of détente.”

He recognized Ronald Reagan for inspiration, and “a helping hand.”

Merkel said, “At the start of 1989, it was a small minority fighting for civil rights and democracy, suffering discrimination, persecution, and incarceration as a result.

“But this minority managed to encourage thousand and hundreds of thousands in autumn of 1989 who took to the streets to protest. Others went via Hungary, Prague, or Warsaw and turned their backs on East Germany, all of them contributed to bringing down the Berlin Wall,” she said.

At that time, people fled East Germany through Hungary, the former Czechoslovakia, or Poland where they sought asylum at West Germany’s embassies.

Merkel pointed out that European values like “freedom, democracy, the rule of law, preservation of human rights … should not be taken for granted,” and must be defended, especially in these times.

She said, as was the case for those who fought for freedom in 1989, the efforts of individuals—even if they seem small—can have a big impact.

Merkel quoted Vaclav Havel who said that “freedom is like the sea” and  “the individual waves may not seem to do much but the power of the tide is impossible to resist.”