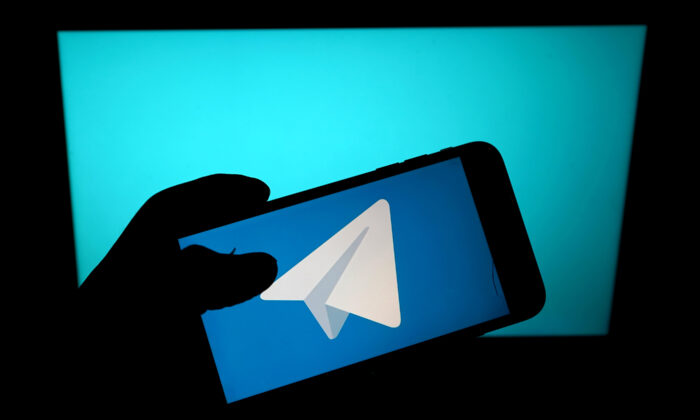 In this photo illustration, the messaging service Telegram app is seen on a mobile phone in London on Jan. 11, 2021. (Edward Smith/Getty Images)
Europe

A member of the Federal Cabinet of Germany has suggested that the government may ban Telegram, likely as a result of its popularity among people who have been protesting CCP (Chinese Communist Party) virus restrictions.

“We cannot rule this out,” said Interior Minister Nancy Faeser in an interview with Die Welt weekly newspaper. “A shutdown would be grave and clearly a last resort. All other options must be exhausted first.”

Telegram is a messaging app similar to Facebook Messenger, WeChat, and WhatsApp. What distinguishes it from the pack is its use of end-to-end encryption, a system of communication which ensures that messages can only be read on the sender’s and recipient’s devices and prevents interception by third parties such as telecom providers. This layer of privacy and security has made Telegram popular with political dissidents worldwide.

In Germany, Telegram has been used as a hub of communication for the protest movement against the measures established to fight the CCP virus, including lockdowns, intermittent mask mandates, and restrictions for the unvaccinated. The protests have escalated since the Central European country imposed increasingly severe measures against unvaccinated citizens. In December, Germany imposed a national lockdown for the unvaccinated, barring them from all but the most essential public services in an effort to increase its vaccination rates.

Telegram has been popular for political dissidents throughout the world, who are drawn to its promise of security by encryption and apparent independence from the tech oligopoly that controls the most popular messaging apps. In Iran, Telegram has enjoyed longstanding popularity, both as a means of communication between residents and expatriates and as an organizing tool of protest movements that emerge perennially against the Islamic regime.

Meanwhile, Telegram has been completely blocked in China since 2015 and has been temporarily or partially blocked in Pakistan, India, Thailand, and Russia, among other nations.

Germany’s Interior Minister Faeser admitted it was unclear what legal procedures would be necessary to shut down Telegram, but said that the German government has been in conversation with the European Union to find ways of regulating the app. Should they decide to join the company of Iran and China in blocking Telegram, it will constitute a marked escalation in the German state’s battle with its citizens over its ongoing and indefinite CCP virus policies.