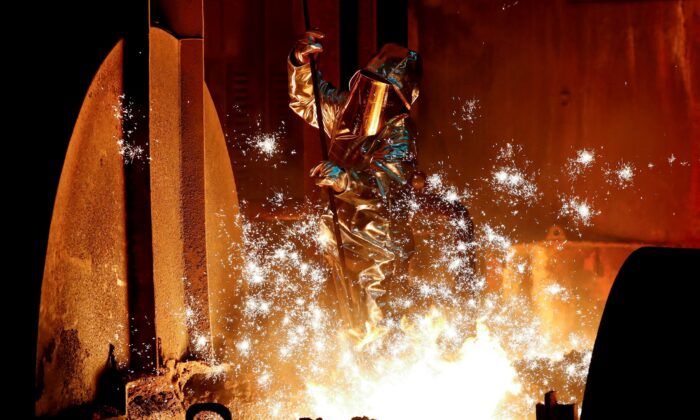 Monday’s Federal Statistics Office showed most of the rise was due to spiralling energy costs, which the BDI industry association said were threatening to hamper an economy that the country’s central bank said was probably shrinking due to increased coronavirus-induced worker absences.

The jump in factory gate costs, considered a leading indicator for consumer prices, was the biggest since 1949, when West and East Germany were founded and the country’s post-war economic data series began.

Analysts polled by Reuters had expected a repeat of December’s figure of 24.2 percent. Sharp increases of 18.4 percent and 19.2 percent were logged in October and November, respectively.

That succession of jumps in the PPI measure, taken before products are processed further or go on sale, suggests “the pressure in the inflation pipeline remains high,” said Commerzbank economist Ralph Solveen.

“We expect the (consumer) inflation rate in Germany to hover around 5 percent into the autumn,” he added, one percentage point more than the Ifo economic institute’s average forecast for 2022.

LBBW analyst Jens-Oliver Niklasch agreed that “it’s likely that retailers will pass on at least some of this (PPI pressure) on to end consumers.”

Separately, the Bundesbank warned of parallel pressures on economic activity from COVID-19, saying a new wave of infections that were stopping many from going to work would probably cause gross domestic product to shrink for the second quarter in a row between January and March.

“Unlike in previous waves … it is not just activity in the services sector that is likely affected by containment measures and behavioural changes,” Germany’s central bank wrote in a monthly report, while forecasting a rebound in the spring.

“Instead, pandemic-related absence from work is likely to dampen economic activity markedly also in other sectors.”

The economic pattern in the eurozone’s biggest economy is being replicated elsewhere in the single currency bloc, complicating the European Central Bank’s task of engineering a smooth transition back towards its consumer inflation target of 2 percent at a time of high but volatile price pressures and headwinds to growth.

The ECB this month opened the door for the first time to an interest rate hike in 2022 and is set to decide in March how quickly to wind down the bond-buying scheme at the heart of its monetary stimulus programme.

It has been argued that longer-term inflation trends remain skewed upward by transitory factors, especially energy costs, which the statistics office said rose 66.7 percent year-on-year in Germany in January.

The BDI said on Monday that those costs, which show no sign of abating, were threatening to cripple the economy and called for government action to ensure German companies remained globally competitive.

In a survey of more than 400 companies, nearly two-thirds said rising energy costs were posing a strong challenge, while nearly a quarter said they threatened their existence, it said.