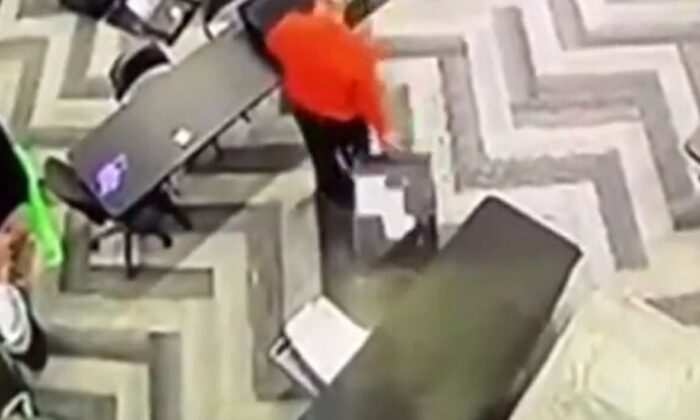 In this screenshot from a State Farm Arena surveillance camera, a man is seen carrying a suitcase or container allegedly filled with ballots without poll challenger supervision on the night of Nov. 3, 2020. (NTD via President Donald Trump's campaign)
Georgia

Georgia Secretary of State’s office said Friday they are investigating the early departure of poll observers in Atlanta following the release of a video that shows black containers being wheeled out from under a table, as the Trump team alleged that no ballot monitors were present during that time.

Walter Jones, a spokesman for the Georgia Secretary of State’s office, told The Epoch Times via email that the agency “was aware that Fulton County scanning had continued during the period captured in the video presented at the Senate hearing.”

“We have launched an investigation into why the monitors from the political parties left before scanning ended. While it was their right to leave early, we want to make certain they were not misled into thinking scanning had stopped for the night when it had not. Nothing we have learned from the independent monitor or our investigation have suggested any improper ballots were scanned.”

Over the past month, there have been conflicting statements from election officials about what happened at the State Farm Arena on the night of Nov. 3. GOP officials said that poll observers left the tabulation area after 10 p.m. before workers started counting ballots again until the early morning hours.

On the night of Nov. 3, Fulton County spokeswoman Regina Waller told ABC News that ballot counters were sent home for the night at around 10:30 p.m., which appears to dispute claims made in a fact-checking article, citing state election officials on Thursday, saying “there was never an announcement made to the media” about observers being told counting was over for the night.

Waller confirmed to The Epoch Times in an email that she told ABC that some workers left but four remained.

While one Georgia election official, Frances Watson, claimed nobody told poll observers to stay or go, GOP officials in the state have disputed the claim.

Georgia Republican Party Chairman David Shafer on Friday wrote of the new official narrative: “They were told to leave.”

State officials on Thursday, in response to the video, said that only a certain type of worker—a “cutter”—was sent home while vote counters stuck around. One of them, Gabriel Sterling, told media outlets on Friday the video shows nothing unusual although he did not explain why the election workers pulled out the suitcase-looking containers from under a table after other workers—and allegedly the poll observers—left the area.

He did not elaborate on where the black container boxes came from or who placed them beneath the table.

“The 90-second video of election workers at State Farm arena, purporting to show fraud was watched in its entirety (hours) by @GaSecofState investigators,” Sterling wrote on Twitter, adding it was “normal ballot harvesting.”

A Fulton County spokeswoman told The Epoch Times via email that the video “is not a credible report of voter fraud,” adding, “The matter has already been investigated and it has been confirmed that there is no fraud.”

Also unclear is why Fulton County officials said a pipe burst caused a two-hour delay to vote counting in a room where absentee ballots were tabulated at the State Farm Arena.

During the Thursday Georgia Legislature hearing where the video was shown, Jacki Pick, a lawyer volunteering for Trump’s legal efforts, noted, “Everyone clears out, including the Republican observers and the press, but four people stay behind and continue counting and tabulating well into the night.” It occurred at around 10 p.m., while the workers stayed until after 1 a.m., according to Pick and the video footage.

Pick said that at 11 p.m., once everyone was gone, workers are seen pulling out the suitcase-looking containers and asked rhetorically whether it’s normal to “store suitcases of ballots under a table cloth.” She added that it doesn’t appear to be a normal procedure after the Trump team reviewed hours of footage.

Georgia Gov. Brian Kemp told Fox News on Thursday that the video is “concerning” to him and asked Secretary of State Brad Raffensberger to offer an explanation.