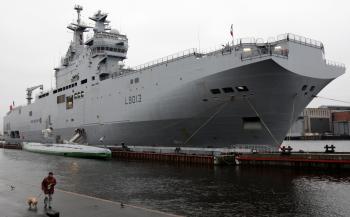 By Peter Sedik
Print
BRATISLAVA Slovakia—Georgia’s foreign minister called for security guarantees on Thursday about the possible sale of French warship Mistral to Russia. "The only destination for this kind of ship is the Black Sea," Grigol Vashadze said to diplomats in Paris.

The 200-meter long Mistral weighs 21,500 metric tons when fully loaded and can carry up to 16 heavy-lift helicopters and other armored vehicles. The deal would mean an unprecedented transfer of NATO-member naval technology to Russia.

On Monday, the Mistral warship docked in St. Petersburg to show off its capabilities to the Russia military and shipbuilders.

Georgia fought a war with Russia in August 2008 when it attempted to reconquer its territory of South Ossetia, controlled by the Russian-backed regional government. After launching a military attack on South Ossetia, Russian troops entered the region and conquered Georgia after five days of fighting. A few days later, Russia recognized the independence of South Ossetia and its troops remained in the region.

Russia’s navy chief reportedly said that a ship like Mistral would have allowed Russia to carry on a much more efficient operation during its war with Georgia, as both countries have a coastline on the Black Sea.

Three Baltic neighbors, Lithuania, Latvia and Estonia, expressed similar concern about the Russian plan. All of them have had tense relations with Moscow after gaining independence when the Soviet Union broke up in 1991.

Apart from the possible warship sale, Putin is to meet French businessmen and ministers to discuss new partnerships for the two new gas pipelines, North Stream and South Stream. The pipelines would allow Russia to bypass Ukraine when delivering gas to Western Europe.