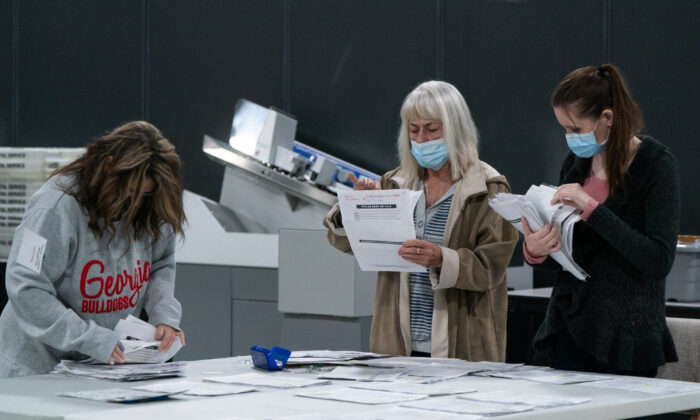 Georgia Recount Must Include a Signature Check

All eyes are now focused on Georgia—which is currently in the middle of a recount—as the Peach State may end up determining the presidency.

When one treats Georgia, Pennsylvania, Michigan, Wisconsin, Arizona, and Nevada as under dispute—i.e., not calling these states, a responsible approach The Epoch Times, unlike other media outlets, has followed—President Donald Trump has now won 232 electoral votes to former Vice President Joe Biden’s 227.

As Supreme Court Justice Samuel Alito has already signaled, the state court decision likely violated the “Electors’ Clause” of the U.S. Constitution, Article I, Section 4, clause 1, as that clause explicitly vests power over how a state elects its electors with the state legislature, not its courts. With Justice Amy Coney Barrett now voting, liberal constitutional scholar Alan Dershowitz has said, “I do think that Trump will win the Pennsylvania lawsuit.”

Trump was likewise leading in Georgia the morning of Nov. 4. Presently, Biden leads in Georgia by 14,122 votes, a razor-thin margin of three-tenths of 1 percent of Georgia’s nearly 5 million ballots counted. As a result, a manual recount has been ordered.

If Trump wins Pennsylvania and Georgia, he will stand at 268 electoral votes, one electoral vote shy of a tie, and two shy of victory. In that event, if Trump wins any of the remaining four swing states (Michigan, Arizona, Michigan, or Nevada), he will become the 46th president.

Though one might think Trump would be happy about the Georgia recount, on Nov. 14 the president wrote in a tweet: “The hand recount taking place in Georgia is a waste of time. They are not showing the matching signatures. Call off the recount until they allow the MATCH. Don’t let the Radical Left Dems STEAL THE ELECTION!”

On Nov. 13, a well-known Georgia trial lawyer, L. Lin Wood Jr., through another Georgia attorney, Ray S. Smith III, brought suit in the U.S. District Court in Georgia against Georgia’s (Republican) Secretary of State Brad Raffensperger, and various Georgia Election Board officials. Similar to the Pennsylvania challenge, this suit (pdf) alleges that the Georgia Legislature was unconstitutionally disenfranchised in deciding how Georgia’s electors are chosen.

The challenge is based on a March 6 settlement agreement signed by Raffensperger and the Georgia Democratic Party to resolve an earlier lawsuit the latter commenced. In the settlement agreement (pdf), Wood alleges, the secretary unconstitutionally modified the procedures for rejecting mailed ballots set down by the Georgia Legislature in the state’s election law.

Under Georgia’s election statute, a voter sending a mailed ballot is required to sign an oath on the ballot’s return envelope. The single county election clerk reviewing a given ballot is commanded to review the voter’s signature (on the ballot envelope) to that appearing on the voter’s registration card, and to reject the ballot if the signatures don’t match. But, in the settlement agreement, that statutory procedure was thrown out and replaced with an entirely different procedure, whereby if the clerk sees a signature mismatch, he or she must seek a further review by two other election officials and the ballot would only be rejected if the three officials, by a majority vote of two, agreed to reject the ballot. This cumbersome process was contrary to the streamlined single-clerk procedure clearly specified by the Georgia Legislature in the law it passed.

Given that Raffensperger sent mail-in ballots to all 6.9 million registered voters in Georgia, the state’s election officials were under intense pressure to assess and process the mailed ballots very quickly. The Georgia Democratic Party knew the mailed ballots would break heavily for Biden, and by forcing Raffensperger into a settlement that set up an impossibly cumbersome and time-consuming three-clerk panel to review each of hundreds of thousands if not millions of mailed ballots, they in turn knew “harvested” fraudulent ballots—not truly signed by the designated voter—would never end up getting rejected and thus would be counted.

In addition, under the settlement, Raffensperger agreed to disseminate to Georgia election officials, and to require them to read and be guided by “training materials” drafted by “handwriting experts” hired by the Georgia Democratic Party.

I can tell you as a seasoned trial lawyer, that “party” experts never “call it down the middle.” These so-called training materials undoubtedly set a very a high bar for rejecting a ballot. How Raffensperger could have ever agreed to disseminate training materials prepared solely by experts hired by Democratic operatives is beyond me.

That’s why Wood’s suit also claims the settlement violated the Equal Protection Clause of the U.S. Constitution in that it impairs the rights of Trump voters in Georgia, by “valuing one person’s vote over that of another” as the Supreme Court ruled cannot be done in Bush v. Gore.

Of course, a simple manual recount will only check the count, not whether forged or fraudulent mailed ballots were counted. That’s why the president wrote on Twitter, “Call off the recount until they allow the MATCH.”

Hopefully, Georgia election officials have preserved all the envelopes containing the voters’ oath-signatures. If they haven’t—if they have allowed that crucial evidence to be lost or destroyed and thus rendered a signature check impossible—those votes are illegal and shouldn’t be counted.

A mere recount in Georgia, which doesn’t involve a signature check, is woefully inadequate. Almost 73 million people voted for Trump. And almost all of them believe the election wasn’t fair, honest, or accurate. As radical leftists assault peaceful Trump voters protesting the “steal,” nothing less than a comprehensive signature check of mailed ballots in Georgia is mandated. No responsible Democrat should dispute this.

Stephen B. Meister
Follow
Stephen Meister is an attorney in New York City.