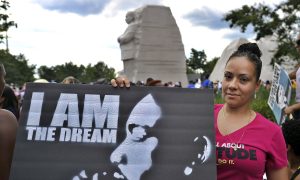 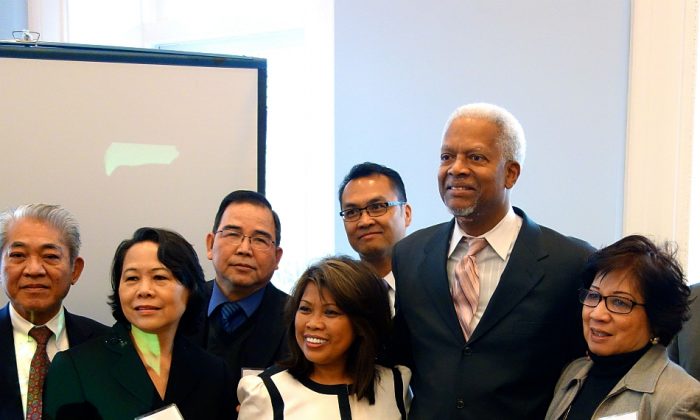 Rep. Hank Johnson (D-Ga.), (C) with attendees at the Asian-American Legislative Breakfast at the Freight Depot in Atlanta, Feb. 10. (Mary Silver/Epoch Times)
US

ATLANTA—Rep. Hank Johnson (D-Ga.) got a hero’s welcome when he arrived at the Asian-American Legislative Breakfast and Lobby Day at the Capitol Feb. 10, just as the event was breaking up. Host and Asian American Legal Advocacy Center Director Helen Kim Ho had just thanked him in absentia “for trying to come,” when he walked in the door.

Johnson said that Asian people are very humble, and he values their humility. “I welcome you. I do not fear you. You have a representative who loves you, welcomes you, and wants to serve you,” said Johnson, who also encouraged those assembled to be more vocal and assertive.

Along with an increase in population growth, Asian-Americans are becoming more visible and engaged in the legislative process.

According to the census, the number of Asian households increased 46 percent between 2000 and 2010, a larger rate of growth than for any other demographic group.

Rep. Rob Woodall (R-Ga.) said he knows firsthand how crucial a few thousand votes can be. He won his seat by a small margin.

Like Johnson, Woodall spoke at the third annual legislative gathering for the first time. He said, “I won the election in a primary because 6,000 people showed up.” He told the audience of about 150 people that they could be kingmakers.

He queried how many of them had written a $10,000 check to the governor’s re-election campaign. No hands went up.

Yet, the governor had also spoken to the group only for the first time that day. “This is the smallest crowd I’ve ever seen the governor talk to. He showed up this morning because you are critically important to this state,” said Woodall.

Georgia Gov. Nathan Deal, who signed one of the country’s most restrictive immigration laws in 2011, did not discuss immigration reform with the Asian-Americans.

The two House members did, however.

Both of them said America should welcome those who graduate from American universities to stay and to bring their families. Woodall said he wanted to “staple a visa to every PhD that comes out of Georgia Tech.” He was born in 1970, after the civil rights movement, and he referred to immigration as the “great civil rights conversation of my time.”

Immigration reform is “a crucial issue to Asian-Americans, three-quarters of whom are foreign-born,” according to Ho.

Ho said she organized the day to invite constituents to lobby for policy changes.

Asian-Americans are interested in seeing the repeal of Georgia’s mandate that employers use E-Verify to check if new hires can work legally. The database is inaccurate, according to Ho, and people with the right to work are often improperly flagged as undocumented.

Other issues dear to the group include lobbying for Georgia to accept the federal Medicaid expansion, addressing cyberbullying, and passing a family care act to allow people who have sick leave to also use it for caregiving, such as taking a parent to the doctor or staying home with a child.

For the first time, Georgia marked Fred Korematsu Day on his birthday, Jan. 30. A group from the Japanese Consulate attended the legislative breakfast Feb. 10 in Korematsu’s honor.

State Rep. B.J. Pak sponsored a resolution to honor the Japanese-American civil rights activist, but festivities for the event were postponed due to Atlanta’s snowy gridlock.

Korematsu refused to report to an internment camp during World War II, and sued President Franklin Roosevelt for detaining Japanese-Americans as potential enemies. Though he lost his case in the Supreme Court, his conviction was overturned in 1983, and he spent the rest of his life working for civil rights.

Korematsu’s attorney, Dale Minami, led the effort to overturn his conviction. He visited Atlanta for Korematsu Day. In an interview with the Georgia AAPI Task Force, Minami said the lesson from the case is that “Justice is not self-executing. Justice is not a gift. It’s a challenge that we must continue to fight for these rights.”