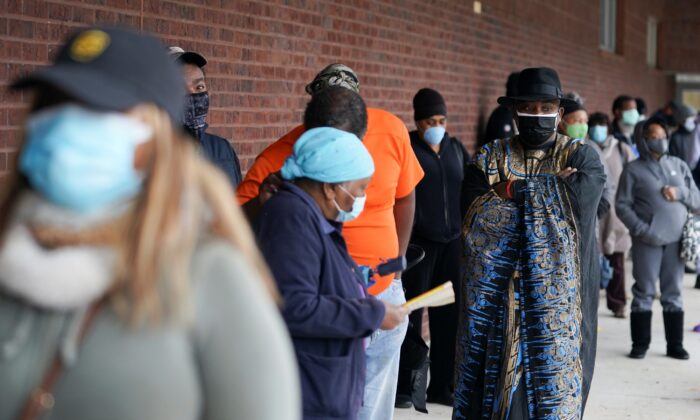 Early voters queue to cast their votes in two run-off elections that could determine control of the U.S. Senate, in Atlanta, Ga., on Dec. 14, 2020. (Elijah Nouvelage/Reuters)
By Zachary Stieber

The federal judge who on Monday blocked two Georgia counties from removing voters from voter rolls eased her order just before midnight Wednesday.

District Court Judge Leslie Abrams Gardner, an Obama appointee, ruled that Ben Hill County still cannot remove any voters from voter rolls but said the Muscogee County Board of Elections and Registration can remove voters if they do not rely solely on the U.S. Postal Service’s National Change of Address system.

The board must allow voters whose eligibility has been challenged to cast a provisional ballot in the Jan. 5, 2021, runoff elections. They also must advise the voter of specific evidence of ineligibility by phone and in writing by Jan. 6, and advise the voter of their right to be heard and present evidence in response to the findings.

It came after the court held a hearing Wednesday.

Ben Hill County Board of Elections members and Supervisor Cindi Dunlap had filed a motion arguing there is no evidence that the county’s actions “were taken in bad faith or with partisan interest.” County officials noted that any elector, or voter, may challenge the right of another elector under state law, and if the challenge meets procedural requirements, the board must “immediately consider such challenge and determine whether probable cause exists to sustain such challenge.”

The county argued that plaintiffs did not meet their burden of proving they’re likely to succeed in the suit.

Muscogee officials in a separate document said the temporary restraining order “was erroneously issued based on an incomplete record.” Officials said they had not removed any voters from the voter rolls and will not do so.

“No ballot of any of the challenged ballots will be rejected unless the Board finds clear and convincing evidence that the ballot was not cast by a Georgia resident,” they wrote.

The lawsuit was brought by nonprofit Majority Forward. According to Georgia Secretary of State Brad Raffensperger, a Republican, the nonprofit is an arm of a political action committee that received $2.5 million from Fair Fight, a voter rights group headed by former gubernatorial nominee Stacey Abrams.

Muscogee officials asked Gardner to recuse herself, but the judge refused.

In a new Dec. 31 document, the judge said she took an oath before becoming a federal judge. She said a recusal “would be a dereliction of duty and a violation of my oath.”

She argued that Fair Fight is not a party to the lawsuit. She then alleged there is “no legitimate reason” for her to recuse.