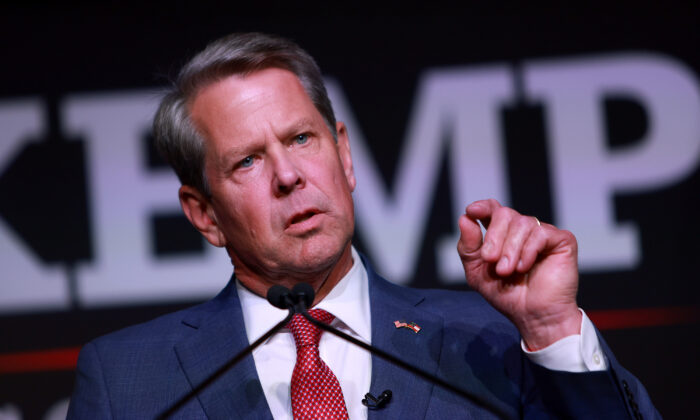 “I am suspending my campaign for governor,” she added later.

Kemp had approximately 53.7 percent of the votes with 90 percent of precincts reporting, according to Georgia Secretary of State Brad Raffensperger’s office. Kemp had 1.9 million votes to Abrams’ 1.6 million.

Kemp had not yet delivered a speech or issued a statement after the race was called for him.

Kemp was buoyed by a strong turnout, including an uncharacteristically strong GOP showing in early voting. Historically, many Republicans prefer to wait until Election Day. But this year they contributed to a new record for early voting, as 2.5 million votes were cast by the time it ended on Friday, according to the Raffensperger’s office.

Abrams, for her part, struggled with her party’s turnout. The party in power usually loses ground in the midterm elections, but this year voters were also contending with the highest inflation in decades, driving up the cost of food and fuel.

Kemp gave a short version of his stump speech and took questions. Most were not about his race but about Herschel Walker’s. Kemp, there with the Republican constitutional officer slate as they prepared to fly out together to campaign some more, discounted Walker’s absence from the group as having significance. It was more a case of “divide and conquer,” he said, as Walker had his own campaign itinerary. Kemp and his fellow candidates then took off for Columbus, Macon, Albany, Savannah, Augusta, and Kennesaw.

Kemp has walked an unusual path among Republicans. Previously the Secretary of State, he was elected in 2018 with Donald Trump’s backing but a rift developed between them in 2020 when he certified the state election results showing Trump lost.  In the primary, Trump threw his backing to a high-profile candidate against Kemp: former Sen. David Perdue.

MAGA Republicans often oppose moderate or establishment Republicans and Trump targeted several this year who had supported his impeachment.

Now they were being asked to vote against Kemp, who governs as the sort of conservative Trump fans usually say they want. He connects with rural voters. Those turning out at his bus-tour stops seem convinced he’s one of them.

With a Republican legislature, Kemp enacted a bill limiting abortion to before a baby’s heartbeat is detected, usually around six weeks. That law went into effect when the Supreme Court’s Dobbs decision overturned Roe v. Wade in June. He also enacted a bill eliminating the requirement of a permit to carry a gun and another tightening up election loopholes many Republicans saw in the 2020 election.

Kemp led measures to reopen Georgia society after the COVID-19 pandemic brought everyday life to a halt in March 2020. He was one of the first in the country to allow small businesses to reopen. Georgia schoolchildren came back to school sooner than in most states.

Kemp has pounded his pandemic leadership on the campaign trail. He halted the state’s gas tax collection during the pandemic and issued state income tax rebates.

Republican voters rewarded him with a solid 3 to 1 victory over Perdue in the May 24 primary. Kemp’s victory proved that Trump’s endorsement, which has influenced primaries and races across the country, had limits.

What Abrams’ defeat bodes for her political future is unclear. She has a national profile but has lost two runs for governor and never held federal office. Her highest elective achievement is a state legislative one.

Abrams lost to Kemp in 2018 and contested the legitimacy of the election, refusing to concede and suing in 2019 to overturn the state’s election laws.

Abrams became an iconic figure for many Democrats across the country thirsting for new party leadership. Democrats’ top leaders—Joe Biden, Bernie Sanders, Nancy Pelosi, Jim Clyburn, and Steny Hoyer—are all over 80 years old except for Biden, who hits that milestone on Nov. 20. Abrams’ name had been touted as his potential running mate.

Black and female, Abrams came from a humble background, got an elite education culminating in a Yale law degree, and rose to the post of state House Minority Leader. After 2018 she became a visible symbol of progressive politics. Abrams spoke all over the country and had no trouble raising money, most of it coming from out of state.

But her second gubernatorial campaign proved problematic. She was now running against an incumbent with a record. She attacked that record, but he defended it just as vociferously.

She had trouble winning as much support from black men as Georgia Democrats running statewide needed. Some questioned whether she was too progressive for Georgia, too attuned to what her national constituency and in-town Atlanta supporters wanted, but not tuned in enough to the needs of voters in Georgia’s suburbs, small towns, and farms.