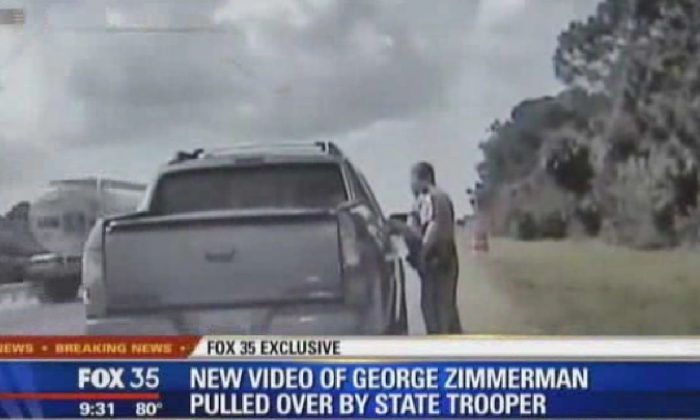 A screenshot of Fox News shows the video, showing George Zimmerman getting pulled over by a Florida police officer.
US

George Zimmerman was pulled over in Florida’s Brevard County last month for tinted windows, which officers said needed to be corrected.

The Orlando Sentinel reported that Zimmerman was also pulled over for an improper tag display on his Honda truck.

“The reason I’m stopping you… you’ve got the tinted tag cover on… those are illegal. It makes it hard to read,” the state trooper said, according to Fox News.

Zimmerman told the officers that he put in tinting due to death threats he had received. He received a warning and was told to get the window tint and tag fixed.

The stop happened at about 11 a.m. at mile marker 208 on southbound Interstate 95.

Zimmerman was acquitted of manslaughter and second-degree murder in the case of Travyon Martin in July. He said he fatally shot Martin in February 2012 in a Florida neighborhood in self-defense.

Police Are Back at Zimmerman Home on Sept. 26 Over Alleged Theft