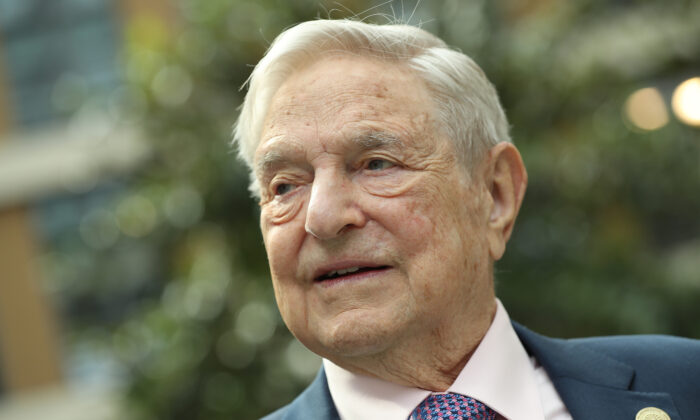 Speaking to the World Economic Forum in Davos, Switzerland, Soros said that Russia’s “invasion may have been the beginning of the Third World War and our civilization may not survive it.”

“Repressive regimes are now in the ascendant, and open societies are under siege,” said Soros, who has been accused of funding left-wing groups and politicians—namely district attorneys—across the United States.

Soros, who made the remarks on Tuesday, added that “even when the fighting stops, as it eventually must, the situation will never revert” to where it was before. Soros also criticized the Chinese Communist Party’s (CCP) “zero COVID” policies and said it has “disastrous consequences, pushing the Chinese economy into a freefall since March.”

He continued: “Coming on top of the real estate crisis the damage will be so great that it will affect the global economy. With the disruption of supply chains, global inflation is liable to turn into global depression.”

“Other issues that concern all of humanity–fighting pandemics … avoiding nuclear war, maintaining global institutions–have had to take a back seat to that struggle. That’s why I say civilization may not survive,” Soros also claimed.

“I think Ukraine today is rendering a tremendous service to Europe and to the Western world and to open society and our survival because they are fighting our fight,” the controversial 91-year-old billionaire added. “They have a really good chance of winning… [W]e must give them all the support that they ask for.”

His remarks come as journalist Jack Posobiec said he and his film crew were briefly detained while in Davos to cover the World Economic Forum. A member of his crew posted a video of armed officers standing around Posobiec and the others.

Describing the situation, “Two minivans full of officers, essentially a quick reaction force pop up, everybody storms out, they’ve got MP5s, one of the guys is flagging me … and then each of us was taken, the entire crew—one by one—behind the building and behind this stack of tables, and we were made to empty our pockets, and we were frisked,” Posobiec continued.

“All the remaining strength of the Russian army is now concentrated on this region,” President Volodymyr Zelenskyy said in a night-time address.