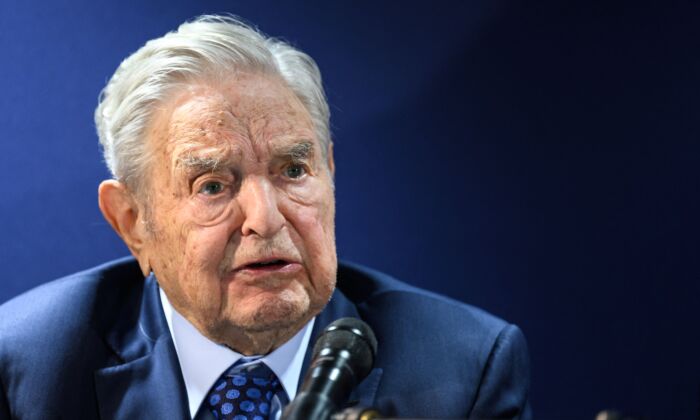 George Soros answers questions after delivering a speech on the sidelines of the World Economic Forum (WEF) annual meeting in Davos, Switzerland, on May 24, 2022. (Fabrice Coffrini/AFP via Getty Images)
By Zachary Stieber

Billionaire George Soros has defended his support of prosecutors who have implemented a raft of measures that critics say have led to a spike in crime and other negative effects.

Soros said in an op-ed in The Wall Street Journal that he’s concerned about crime but also sees a need to reform the criminal justice system, which he described as “rife with injustices that make us all less safe.”

“The idea that we need to choose between justice and safety is false. They reinforce each other: If people trust the justice system, it will work. And if the system works, public safety will improve,” he wrote, pointing out that black people in the United States are more likely to be in jail than white people, a discrepancy some attribute to racism and others to the difference in crime rates between the groups.

Soros and the groups he funds have financially supported the campaigns of dozens of leftist district attorney candidates in recent years, many of whom have won elections.

They include George Gascón, the Los Angeles prosecutor who may be recalled; Lawrence Krasner, the district attorney of Philadelphia; Alvin Bragg, the top prosecutor in New York County; top Chicago prosecutor Kim Foxx; and Kimberly Gardner, the circuit attorney for St. Louis.

The prosecutors share some commonalities. Practically all have implemented policies that include halting or curbing the prosecution of lower-level crimes and moving for some type of bail reform, either eliminating bail or adjusting the bail system.

The prosecutors and their supporters say the alterations are aimed at improving the justice system, but critics say the policies have led to crime spikes.

While the prosecutors backed by Soros oversee 20 percent of Americans, more than 40 percent of U.S. homicides in 2021 occurred in their jurisdictions, according to the Law Enforcement Legal Defense Fund, a group with the mission of supporting law enforcement.

“Most of these prosecutors pursue radical justice policies upon assuming office including eliminating bail, dismissing felony cases, and seeking lenient sentences while creating antagonistic relationships with their public safety partners, especially the police,” the group said in its report, released in June.

Soros said that the “reform-minded prosecutors” are implementing “an agenda that promises to be more effective and just,” including “prioritizing the resources of the criminal-justice system to protect people against violent crime,” treating drug addiction as a disease rather than a crime, and seeking an end to “the criminalization of poverty and mental illness.”

“This agenda, aiming at both safety and justice, is based on both common sense and evidence. It’s popular. It’s effective. The goal is not defunding the police but restoring trust between the police and the policed, a partnership that fosters the solving of crimes,” he wrote.

Soros also claimed that the spike in crime witnessed during the COVID-19 pandemic wasn’t connected to the policies of the prosecutors he’s supported, citing an academic study that “shows no connection between the election of reform-minded prosecutors and local crime rates.” He didn’t link to or identify the study, and it was unclear where or when it was published. He also said he’d continue supporting candidates whose policy proposals he favors.

The op-ed drew challenges from critics, including Rafael Mangual, head of research for the Policing and Public Safety Initiative at the Manhattan Institute.

Soros, Mangual wrote in the City Journal, “offered a shallow, essentially data-free collection of platitudes—’If people trust the justice system, it will work’—and incomplete observations,” taking issue with the note about black people being more likely to be locked up than white people.

“Such a contention is meant to persuade the reader that these incarcerations are mostly (if not overwhelmingly) illegitimate—the product of racial animus more than anything else. What else could it be? Well, how about disparate rates of criminal offending? A Bureau of Justice Statistics study of homicides between 1980 and 2008 found that blacks commit homicide offenses at a rate ‘almost eight times higher than the rate for whites,'” he said.

The Washington Examiner editorial board, meanwhile, said that Soros’s op-ed “was supposed to defend and justify his backing of prosecutors who are extraordinary for being soft on crime.”

“But time and again, such prosecutors have shown that their philosophy is inconsistent with justice. Again and again, they release violent career criminals who victimize ordinary citizens going about their business,” the board said, noting examples from Virginia and Illinois.

“Criminal justice reform was once popular and bipartisan. But Soros and his soft-on-crime prosecutors have been busy destroying the consensus that previously existed behind it,” the board concluded. “By applying leniency when completely inappropriate and letting predators loose on their communities, he is killing off any chance for genuine common sense to rule the day and mete out justice with appropriate mercy.”