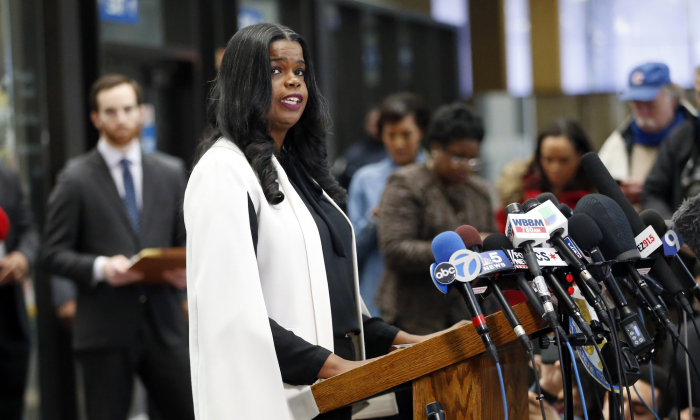 Billionaire financier George Soros and other wealthy liberal donors spent hundreds of thousands of dollars to help elect Cook County State’s Attorney Kim Foxx in 2016, but she is just one of nearly two dozen local prosecutors backed by Soros in recent years.

Foxx, the top law enforcement official in Chicago, is currently under intense scrutiny because of a decision to drop all charges against actor Jussie Smollett on March 26. The “Empire” star was indicted on 16 felony counts last week stemming from an alleged fake hate crime and the filing of a false police report.

Standing next to Chicago Police Superintendent Eddie Johnson on March 25, Mayor Rahm Emanuel called the decision not to prosecute Smollett a “whitewash of justice,” and later told CNN’s Wolf Blitzer that the decision emanating from Foxx’s office was an “abomination.”

“To me, it makes no sense,” said Emanuel. “It makes no legal sense, no common sense, and this is an abomination in my sense of justice.”

Smollett told police in January that he was attacked by two masked men who yelled, “This is MAGA country,” a reference to President Donald Trump’s “Make America Great Again” slogan. Smollett, who is gay and black, was walking home from a Subway sandwich store at 2 a.m. in frigid temperatures when he said the alleged Trump supporters attacked him.

But a police investigation found that Smollett had paid two Nigerian brothers with a check to help him stage the alleged hoax.

Foxx, the first African American state’s attorney in Cook County, recused herself from the racially charged case in February, after it was revealed she was backchanneling communication with Smollett’s family.

Text messages surfaced showing Foxx was in contact with former First Lady Michelle Obama’s former chief of staff, Tina Tchen, who is a close friend of the Smollett family.

“I wanted to give you a call on behalf of Jussie Smollett and family who I know. They have concerns about the investigation,” Tchen wrote on Feb. 1.

Foxx officially stepped aside, putting her deputy, First Assistant State’s Attorney Joseph Magats, in charge. Chicago’s police union has called for an investigation into her activities.

“Our goal and our No. 1 priority is combating violent crime and the drivers of violence … and I don’t think that Mr. Smollett is a driver of violence or a violent individual,” Magats told ABC7 Chicago on March 25.

While stunning to Emanuel and area law enforcement, Magats’s message resonates with a Soros-funded initiative to elect progressive prosecutors in high-population counties around the country.

According to records at the Illinois State Board of Elections, Soros gave a total of $408,000 to a super PAC that backed Foxx in 2016, called Illinois Safety & Justice. With the help of outside spending, Foxx seized on a tragic police shooting of an unarmed black man and defeated incumbent State’s Attorney Anita Alvarez, a Democrat.

Upon taking office, Foxx wrote in an open letter that “improving public safety was her top priority,” and that “we cannot fully address our public safety crisis without first taking steps to restore trust and increase accountability and transparency.”

In 2016, Soros also bankrolled a state attorney election in Orange County, Florida. According to records at the Florida Department of State, he gave almost $1.4 million to the Florida Safety & Justice PAC, which supported Aramis Ayala, a progressive lawyer who was making her first bid for public office.

The spending was massive for a local down-ballot contest, and Ayala defeated the Democratic incumbent to become the top prosecutor in Orlando. Soros had also given another $430,000 to a PAC called United for Progress, and $1.3 million to the Florida Democratic Party.

While records indicate that Soros didn’t contribute to Florida Safety & Justice in the 2018 election cycle, his total PAC contributions in the key swing state swelled to nearly $1.9 million.

In 2017, Ayala ran into a controversy of her own, when she unilaterally decided against seeking the death penalty in cases that warranted it under Florida law. Then-Gov. Rick Scott, a Republican, began reassigning certain cases to a neighboring state attorney despite her vocal protestations. The liberal-majority state Supreme Court later sided with Scott.

Soros also backed a progressive defense attorney in Philadelphia in 2017, who once joked that he was so liberal, he was “completely unelectable.”

But with the help of two contributions totaling $1.66 million to the Philadelphia Justice & Public Safety PAC, Soros helped Larry Krasner become the city’s district attorney. Krasner had previously represented Occupy Philadelphia and Black Lives Matter, and had sued the Philadelphia Police Department more than 75 times, according to Philadelphia Magazine.

Soros has also backed progressive district attorney candidates in Mississippi, New Mexico, Louisiana, and Texas. In each case, state-level super PACs have been infused with cash under a variation of the moniker, “Safety & Justice.”

Federal Election Commission records show that the parent organization has the same address as the Washington law firm Perkins Coie.

Marc Elias, chairman of the firm’s political law group, was the general counsel for Hillary Clinton’s 2016 presidential campaign. He also personally retained the opposition research firm, Fusion GPS, which produced the infamous Steele dossier that sparked the Trump-Russia collusion investigation, according to The Washington Post.

Soros spent millions in California district attorney races in 2018, but with limited results. While the billionaire activist dropped a total of $3 million in failed attempts to unseat incumbents in Sacramento, San Diego, and Alameda counties, he was successful in Contra Costa County.

In some cases, local activists said they should have received more money instead of relying on media blitz television ads.

“Soros, if you’re going to put money into something, put it into people and activists and groups and leaders who can really mobilize and get people to the polls,” the Rev. Shane Harris, founder of the National Action Network’s San Diego chapter, told the Los Angeles Times.