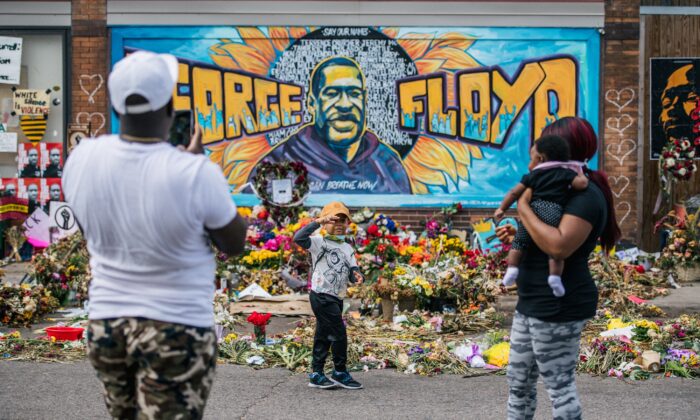 A family takes pictures in front of a separate mural of George Floyd in Minneapolis, Minn., on May 28, 2020. The mural looks similar to the one that collapsed on July 13 in Toledo, Ohio. (Brandon Bell/Getty Images)
US News

Toledo witnesses and fire department say lightning caused it to collapse, but city inspector said building was in disrepair
By Jack Phillips

Witnesses and a local fire department spokesperson said a George Floyd mural in Toledo, Ohio, was destroyed Tuesday after it was struck by lightning, although some local officials disputed their assertion and said it crumbled due to disrepair.

Sterling Rahe, a spokesman for the city’s Fire and Rescue Department, told the Toledo Blade that the department agreed with witnesses’ claims that the mural collapsed due to a lightning strike. That assertion, according to Rahe, was also based on an inspection of the scene.

Heavy thunderstorms replete with lightning rolled across the Midwest and the northeastern United States this week. Weather forecasters with WTVG-TV reported there was a lightning strike in the area of the mural at Summit and Lagrange streets in Toledo.

A city building inspector, Hugh Koogan, disputed the claim that a lightning strike destroyed the mural, which was created amid protests, riots, and violence after Floyd’s officer-involved death in May 2020.

“It was just age. It just came away,” he told the Toledo Blade. “It happens to the older buildings.”

The George Floyd Memorial mural at Summit and Lagrange in Toledo has come down. No word yet on the circumstances #13abc pic.twitter.com/SkB2eDhijB

Koogan added that city officials noted that the middle of the wall, where much of the damage occurred, was bowing in recent days. The official dismissed claims that any weather, including lightning or wind, was the cause.

David Ross, who painted the mural, told the Toledo Blade that he believes the mural did not simply collapse, suggesting that vandals may have targeted it. Ross alleged that he received threats and criticism for painting the picture, which shows an idealized image of Floyd behind a multicolored backdrop.

“When I did the mural, there was stuff on the wall that I couldn’t remove and that let me know how strong that structure was,” Ross was quoted by the paper as saying and added that he’ll repaint it despite the cause. “The lightning thing, that’s possible, but I know it didn’t just fall.”

Photos taken at the scene of the mural collapse show what appears to be a black streak in the center of the brickwork, although it’s not clear whether that’s due to age, a lightning strike, or something else.

As reported by WTVG-TV, the mural collapsed nearly one year after it was finished, in July 2020. Local Black Lives Matter groups have held demonstrations and other events in front of the mural since then.

A Toledo building inspector told the station that after the collapse, the building is structurally sound.

The Epoch Times has contacted the City of Toledo for additional comment.