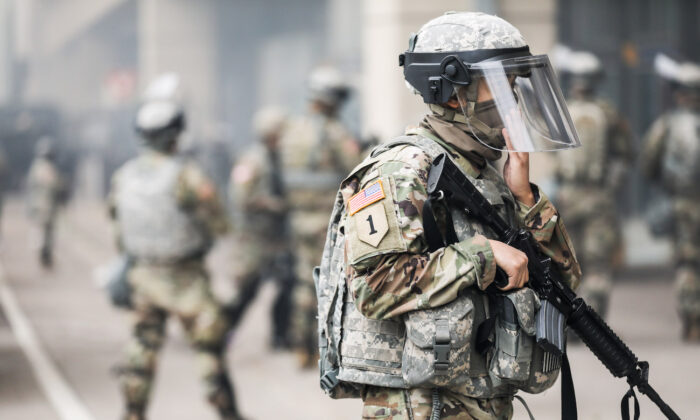 Ahead of Hurricane Ian’s predicted landfall in western Florida, the head of the Florida National Guard confirmed Monday that Guardsmen who are not vaccinated for COVID-19 will be activated in response to the storm.

Florida National Guard Maj. Gen. James Eifert on Monday told reporters that the Pentagon’s vaccine mandate does not impact the state’s capacity to activate unvaccinated service members to deal with a natural disaster such as a hurricane.

“The vaccine mandate does not impact our ability to bring people in on state active duty … we will be activating all of those people [who are unvaccinated],” he remarked.

Secretary of Defense Lloyd Austin mandated that all service members receive COVID-19 vaccination and that  National Guardsmen who refuse to get the shots must obtain a religious or medical exemption or face repercussions. Some Guard members could face a loss of wages and cannot train, while those who continue to refuse the vaccine can be potentially discharged, according to the Department of Defense.

Numerous lawsuits have been filed against the Pentagon due to its mandate, while some lawmakers have questioned whether such orders are putting a damper on the U.S. armed forces’ recruitment efforts. And earlier this month, former Secretary of Defense Mark Esper warned that several branches of the military are severely “struggling” to find recruits.

The National Hurricane Center (NHC) on Monday afternoon said Ian is a Category 2 system with 100 mph winds. The storm has strengthened since Monday morning when forecasters said it was a Category 1 storm with wind speeds hovering around 85 mph.

Meanwhile, hurricane warnings have now been issued for the central western Florida coastline, including Tampa Bay, indicating the storm is going to impact the area in the next 24 to 36 hours. First, Ian is on track to hit western Cuba, according to the NHC. After impacting Cuba, the system is expected to strengthen into at least a Category 3 hurricane with 111 mph or greater wind speeds.

Models published by the NHC suggest Ian is forecast to remain a Category 3, or major, hurricane as it nears the Florida coastline before weakening. Then, it’s forecast to make landfall near Tampa as a sub-Category 3 system.

As officials in Tampa Bay on Monday issued mandatory evacuation orders, Jeff Masters, a meteorologist for Yale, told the Tampa Bay Times that Tampa Bay could see 5 to 10 feet of storm surge and 10 inches of rain from the hurricane.

“When I look at this storm I feel like I felt when Andrew was approaching Miami and when Katrina was approaching New Orleans,” Masters said. “We have a potential historic catastrophe in the making.”