General Public Unaware of Push to Normalize Pedophilia in Culture and Academia: Counselor 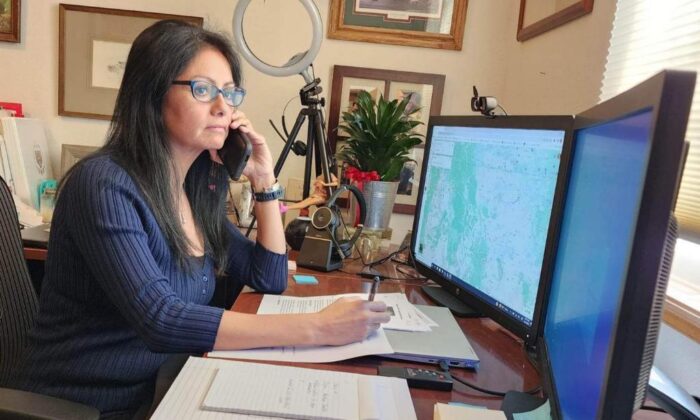 Colorado mom Lydia Lerma feels as though she has been punched when she hears the trendy new term “minor-attracted person.” Just thinking of the damage a pedophile inflicted upon her son, who was six at the time, causes pain.

Creating a polite-sounding term for someone sexually attracted to children enrages her.

Any push to normalize pedophilia or designate it as another sexual orientation to be tolerated is “unconscionable,” Lerma told The Epoch Times.

“That’s a bunch of [expletive]!” she said of academics pushing acceptance of pedophilia.

“They are going to face the greatest resistance that they have ever seen. Society is not going to let that happen.”

But in academic circles, some have begun to argue that pedophilia should be considered just another sexual orientation, not a mental disorder.

And a therapist who treats pedophiles told The Epoch Times that he believes pedophilia is on its way to becoming normalized.

In 2018, medical student Mirjam Heine, who said she had a background in psychology, gave a presentation called “Pedophilia is a Natural Sexual Orientation” during a TEDx event at the University of Wurzburg in Germany. A program guide for TEDx said she was mainly guided by the works of professor Klaus Michael Beier, head of the Institute for Sexology and Sexual Medicine at the University Hospital Berlin and the prevention network “Kein Tater Werden.”

In her remarks, Heine said pedophilia is an “unchangeable sexual orientation,” just like heterosexuality.

“No one chooses to be a pedophile; no one can cease being one,” Heine argued during her talk. “The difference between pedophilia and other sexual orientations is that living out this sexual orientation will end in a disaster.”

Most countries in the world, including the United States, outlaw adults having sexual contact or intercourse with children in most situations.

The term minor-attracted person grabbed headlines after professor Allyn Walker used it during a discussion on pedophiles in November 2021. Walker, a woman who transitioned to live as a man, was discussing her book: “A Long Dark Shadow: Minor-Attracted People and Their Pursuit of Dignity.”

In the interview with the Prostasia Foundation—a San Francisco organization focused on child sexual abuse—Walker said it’s less stigmatizing to use the term minor-attracted person than pedophile when referring to people “who don’t act on their urges to have sex with children.”

The interview drew fiery criticism. Within weeks, Walker resigned from her job as an assistant sociology and criminal justice professor at Old Dominion University in Virginia.

After stepping down, Walker said in a prepared statement that her research was “mischaracterized” by some in the media. Walker blamed the public outcry on intolerance for her transgender identity and said the research aimed to prevent child sexual abuse.

Two former colleagues at Old Dominion defended Walker in the journal of the American Society of Criminology.

“Our friend and colleague, Dr. Allyn Walker, was the victim of a trolling attack on their research and their person that resulted in the loss of their position at Old Dominion University (ODU),” Ruth Triplett and Mona Danner wrote.

The attacks, they wrote, were “centering around misinformation and links to Dr. Walker’s identity as non-binary, transgender, and Jewish.”

A November headline from a Washington Post theater review reads: “‘Downstate’ is a play about pedophiles. It’s also brilliant.” The off-Broadway play characterizes pedophiles as complicated and troubled victims of harsh punishment.

Jon Uhler is a 30-year veteran counselor who has worked with sex offenders in the Pennsylvania and South Carolina prison systems. Throughout his career, he has assessed hundreds of pedophiles.

Uhler, a member of the Association for the Treatment of Sexual Abusers (ATSA), said he’s afraid that pedophilia is on the road to normalization.

The idea is that pedophiles are reenacting their trauma by choosing a victim of the age they were when abused, Uhler said. But that’s not accurate, he noted.

Researchers are taking information from interviews with pedophiles and considering it to be true, instead of realizing that they’re dealing with the “world’s greatest deceivers,” Uhler said.

Even so, Walker’s ideas have permeated sex offender treatment circles, he said. Walker spoke at this year’s ATSA conference.

“They are going to push to have it recognized as a sexual orientation, which would grant it civil rights status,” Uhler said.

If that happens, employers could no longer discriminate against pedophiles in areas such as employment, he said.

And if teens are given the legal right to decide if they want to have a sex-change operation or take hormones to try to appear as the other sex, that could help make it legal for pedophiles to act on their sexual urges, Uhler predicted.

If children can legally decide what they can do with their bodies, then pedophiles could argue that they should be able to consent to a sexual relationship, he said.

Their interest “is ultimately lowering the age of consent.”

The general public doesn’t understand what’s happening, according to Uhler. It’s one of the defining issues of our time.

Scott Clark, a minister who teaches church history and historical theology at Westminster Seminary in California, has called the destigmatization of pedophilia the last stage of the “neo-pagan sexual revolution.”

“There’s a pretty obvious move to normalize pedophilia,” he said. “This invariably comes from adults. It’s not coming from children.”

Clark feels that researchers in academia are setting the final stage for a society in which there are no police, no prisons, and no stigma for being sexually attracted to children.

“It all goes back to our lack of connection to nature,” he said. “Once nature is gone, we no longer have boundaries, and all things are possible.”

The first stage of the sexual revolution occurred with the introduction of feminism. The second came with the legalization of abortion, which coincided with more women moving into the workforce, according to Clark.

The third stage began in 2015, when the U.S. Supreme Court held in a 5–4 decision that the 14th Amendment required states to grant same-sex marriages.

Homosexuality had been considered a mental disorder until the American Psychiatric Association voted in 1973 to take it off the list. he said the decision was political, not scientific.

Pedophilia remains on the list of mental disorders, but Clark thinks it’s only a matter of time before the designation is removed.

“This is all just part of a long march to normalizing everything,” he said.

Like Uhler, Clark thinks the ultimate goal is to lower the age that a minor can consent to sex.

“The culture is, in my view, descending into kind of a Dark Age,” Clark said.

Florida attorney Jeff Childers, who has fought against mask mandates and helped parents oppose sexualization in schools, said looking back at how homosexuality became recognized as an orientation may offer insight into what could happen.

Once homosexuality became normalized, it led to the repeal of sodomy laws, Childers noted.

So if pedophiles gain sexual-orientation status, they could work on decriminalizing sex between minors and adults, he said.

But there’s a significant difference between sodomy laws and sex offender laws, meaning that it would be much tougher to weaken them, according to Childers. One of the arguments used to strike down sodomy laws was that they were antiquated and not often used. That can’t be said for child sexual assault laws.

He said there appears to be an erosion of the penalty for pedophilia in California. He referenced a Daily Mail exposé that showed that thousands of convicted pedophiles in California are being released from prison less than a year after being convicted of rape, sodomy, and sexual abuse of children younger than 14.

California’s Senate Bill 145, passed in 2020, expanded a law allowing judges discretion when considering whether those engaged in gay sex with minors should register as sex offenders.

In a previous bill passed in California in 1944, judges were allowed to make this call but only when the crime involved vaginal sex with a minor. Judges have always had the authority to exclude a person from registering if he or she isn’t more than 10 years older than the minor.

So under the law, a 24-year-old having sex with a 14-year-old might avoid being placed on the sex offender registry under statutory rape laws.

“The notion that a 14-year-old could consent to sexual relations with an adult is irrational,” Childers said. “That 14-year-old can’t vote. Of course, they can’t drink until they’re 21.”

People must fight the issue of normalizing pedophilia at every juncture, Childers said. Or suddenly, it could become legal.

Lerma’s quest for justice for her son made headlines in 2018 after she successfully hunted down his abuser, Andrew Vanderwal, a man who had access to the child while living at her ex-husband’s home. After he was arrested and released from jail on bail, he disappeared.

On a tip, Lerma traveled to Mexico and found him in a grocery store parking lot. Her success in locating Vanderwal led to his arrest and conviction for molesting her son and another child.

She remembers trembling when she spotted him in Ciudad Cuauhtémoc from her rental car.

“It was this absolute rage and like I could get out and kill him,” Lerma said.

It would be wrong to use gentle words to describe the man who wounded her son so profoundly, she said.

And even if pedophiles have been sexually molested, that doesn’t give them permission to prey on children, according to Lerma. She was a victim of sexual abuse in her youth but didn’t become an offender, she said.

Now, in her work with the Lydia Lerma Foundation, she helps parents hunt down perpetrators running from justice. And she uses professional and social networks to circulate images of fugitives she’s tracking worldwide.

Pedophilia shouldn’t be considered a sexual orientation because it involves an unequal power dynamic between a child and an adult, Lerma said.

“It’s an abusive situation,” she said. “There’s no equality there. There’s no consent there. I don’t care how they try to spin it.”