Gender Ideology Is a ‘Cultural Wrecking Ball’ Striking at Heart of the Family: Expert 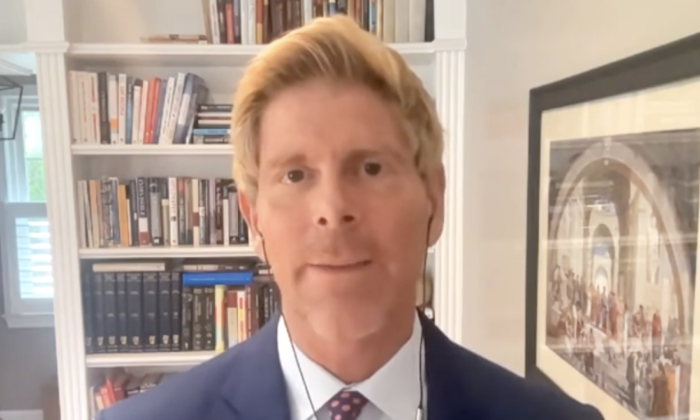 Jay Richards, director of The Heritage Foundation’s DeVos Center for Life, Religion, and Family, in an interview for NTD's "Capitol Report" program on April 26, 2022. (Screenshot/NTD)
By Ella Kietlinska

Gender ideology is a Marxist theory meant to destroy the family by turning children against their own bodies and often against their parents and dissolving basic categories, such as male and female, that humans use to navigate the world, a researcher said in a recent interview.

Jay Richards is the director of The Heritage Foundation’s DeVos Center for Life, Religion, and Family.

In an interview for EpochTV’s “Crossroads” program, Richards said gender ideology denies the reality of male and female as a given biological category, replacing it with an entirely internal and subjective category of gender identity.

“What you really are isn’t sort of defined or even constrained by your body, it’s defined by this internal kind of subjective view of your gender, which is itself a circular definition,” he said.

There is fundamental incoherence in gender ideology because the term “trans” implies a sexual binary initially, meaning a man can transition to become a woman, Richards said.

“To say ‘a trans woman is a woman’ is to imply that a woman is something,” he said.

Richards said this matters because the concept affects real people and real children, and their perceptions about their bodies.

The key element of the theory is that “it teaches children that they could be born in the wrong body,” Richards said. “That is probably the most toxic idea you could possibly introduce to a child.”

Richards believes that gender ideology has nothing to do with individuals who have a rare disorder of sexual development.

“Gender ideology is a cultural wrecking ball for destroying the fundamental cell of society, which is the family. And so the very definition of family requires a sexual binary, a mother and a father who can mate and can have a child, which they raise together.”

“[The wrecking ball] is less interested in what comes after than in destroying the present order,” he said.

Leftists have known for a century and a half that social institutions outside the state are “the main bulwark against a totalizing state,” Richards said, “so they have to be destroyed.”

The first things that human beings learn are some of the most basic categories about the world, such as adult, child, male, female, good, bad, boys and girls, Richards said.

“If you can take a child at an age before he or she has actually formed those categories and dissolve it and say, ‘Well … some people are boys, some people are girls, some people are both, neither, or somewhere in between’—which is a direct quote from a children’s book—you dissolve that category that they use to navigate the world, and you can replace it with something much more to your liking.”

Richards said it’s unknown how children’s thinking and mental processes will be affected by these teachings, which he called “history’s first experiment with this particular kind of radical ideology.”

“This idea that there are no males and females or that a male can become a female, simply by self-identity, this is really a new idea,” he said. “And we don’t know what it is going to do. We do know that, look, if children can’t trust their perception that there are males and females, what can they trust, right? Almost all of their cognitive faculties are now sort of up for grabs.”

Kids can be reached behind their parents’ backs through social media or in the schools, where they’re taught that “their parents are the primary impediments to them realizing their true self,” Richards said.

This ideology pits children against their parents, he explained. Children then turn to self-supporting social networks, usually on social media, that will reinforce this ideology.

“It also turns children against their own bodies,” Richards continued.

It gets them on a sort of sterilization pathway that starts with social transition and ends with puberty blockers, cross sex hormones, and surgery, he pointed out.

“My hope is that we have a cultural and a policy solution in which we can stop it before we end up with hundreds of thousands of sterilized children.”

How to Counter Gender Ideology

Gender ideology is such a radical idea that ordinary people will think it is insane when they first hear it, Richards said. They will not believe in what is actually happening, or will think that it only takes place in California.

Therefore, the first step to defeating it is “persuading the public that this is real, it’s probably in your schools, and it’s certainly on your children’s social media,” Richards said.

The next step would be to convince conservatives and Republicans that raising this issue can help them to win elections, he said. They usually don’t touch on this issue because it’s an uncomfortable subject for them, he added.

People should also educate themselves on gender ideology, Richards said, and if they have kids, they should find out what is happening in their schools. Parents should insist on enacting bills that would protect their rights in their children’s education, like the one adopted in Florida, Richards said.

Such bills should make it clear that parents have the primary responsibility for the education of their children, which they merely delegate to the schools, Richards said.

“They don’t give over their parenting to the schools.”

In March, Florida Gov. Ron DeSantis signed into law the Parental Rights in Education bill that prohibits classroom instruction on sexual orientation in kindergarten through third grade, as well as instruction that isn’t age-appropriate.

Arkansas passed a law in April called the SAFE (Save Adolescents From Experimentation) Act that bans gender reassignment surgeries and hormone treatments for anyone under the age of 18.

The measure empowers the parents and children with a private right of action that allows them to sue the gender clinics and doctors who performed such procedures within 20 years, Richards said.

At the end of March, the Department of Justice (DOJ) issued a letter (pdf) to all state attorneys general warning them that they could be violating civil rights laws if they keep minors from receiving “gender-affirming care,” Richards wrote for The Heritage Foundation.

On the same day, President Joe Biden posted a video message on Twitter saying: “To parents of transgender children, affirming your child’s identity is one of the most powerful things you can do to keep them safe and healthy.”

In June, Biden signed an executive order that sought to restrict conversion therapy, a practice that attempts to change an individual’s sexual orientation from homosexual or bisexual to heterosexual or their gender identity from transgender to biological gender using either physical, psychological, or spiritual means.