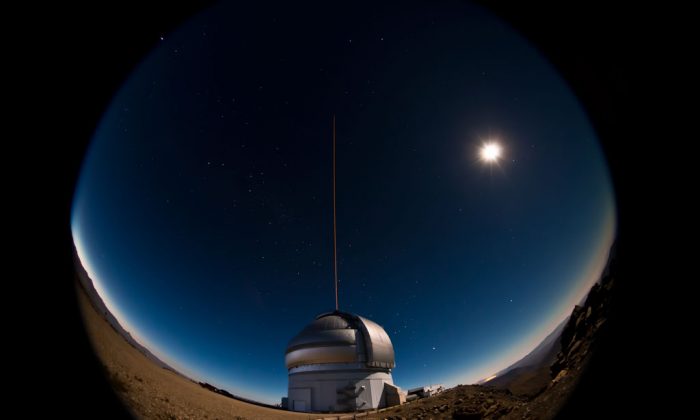 The Gemini South telescope – pictured here – houses the latest gear to hunt down and snap photos of exoplanets. (Gemini Observatory, CC BY)
Science

There is excitement in astronomy and planetary science departments worldwide as the new Gemini Planet Imager, housed in the Gemini South Telescope in the Chilean Andes, turns its razor-sharp gaze to the skies.

This device, known as GPI for short, is the first of a small handful of sophisticated instruments to attempt a task that until recently was considered all but impossible: to image the faint mote of light betraying the presence of a planet nestled against the overwhelming glare of its host star.

Planets in orbit around distant stars – exoplanets – are now known to adorn more than 1,000 star systems. There is possibly five times that number under strong suspicion awaiting only final confirmatory data to join the club.

You could be forgiven for thinking this avalanche of discovery – all coming in the past 20 years – has settled most of the important questions in exoplanetary science.

The reality, though, is it hasn’t.

The sample of exoplanets we now have tells us far more about the limitations of the techniques we use to find them than it does about the exoplanets themselves. We have only seen the tip of the iceberg.

The search can be likened to the proverbial scientist in a dark car park searching for a set of dropped car keys under the only streetlight. A passer-by asks: “Did you drop your keys there?” “No,” you reply. “I dropped them somewhere over there in the dark, but I can only see here.”

That patch of discovery illuminated by our present instruments particularly favours the largest planets in the closest orbits about their host stars.

The extreme examples of this (and the most celebrated exoplanet discovery – of 51 Peg – that launched the field in 1995) are known as “hot Jupiters”. The name understates their inhospitable crushing gravity combined with searing radiation field from the looming host star.

In a quest to identify planets capable of supporting life hot Jupiters score low. Astronomers are working on a valuation scheme that would identify those that lie within the so-called “habitable zone”.

Recognising water in liquid form as the critical environmental ingredient for life on Earth, exoplanets are said to be in this zone if they are able to support a similarly temperate climate.

To get a more representative picture of exoplanetary populations, including those in the habitable zone, we need new techniques to illuminate the unknown areas beyond the reach of our present instruments.

Peering Into the Depths

The most obvious way to find an exoplanet is to look for specks of light circling a host star. This also turns out to be one of the most challenging.

To an observer looking at our solar system from a great distance, the Earth is about ten thousand million times fainter than the Sun.

This is the brightness difference between a firefly and a modern lighthouse lamp capable of sending a beam to a ship 20km out to sea.

Further compounding the difficulty, the exoplanet imaging problem would be equivalent to the ship’s captain identifying the firefly buzzing about only 1mm from the searing glare of the central lamp.

If this does not sound difficult enough, the whole exercise must be performed while looking at the star through the Earth’s turbulent atmosphere.

This causes a shimmering haze that smears the star and planetary light together into a blurred mess – a bit like sea-spray on the outer glass lighthouse window preventing any clear view within.

This limitation to the clarity of images made with telescopes, known as “seeing”, has been the bane of astronomers since it was first properly identified by Sir Isaac Newton.

Seeing turned out to be all but intractable until it became a problem for then US president Ronald Reagan’s Strategic Defence Initiative (also known as the Star Wars program) in the 1980s.

Tasked with disabling an incoming missile using a laser beam, military researchers realised that without correcting for the seeing, their laser would diffuse, warming a large patch rather than punching a concentrated lethal hole in the target.

Their solution was to develop a complex new technology known as Adaptive Optics. Since it was declassified in the 1990s it has been taken up and improved at astronomical observatories worldwide.

The key components to the system are a specialised sensor to measure the errors introduced by the atmosphere each instant. It uses a deformable mirror driven by rapid electro-mechanical actuators (or motors) which can undo most of the corrugations in the starlight wavefronts.

The new GPI instrument is the first of a revolutionary new generation given the title of Extreme Adaptive Optics systems, with an order of magnitude more actuators delivering exquisite wavefront correction.

All this will allow astronomers to turn on a new powerful floodlamp illuminating unknown sectors of the exoplanetary landscape. For stars in the local neighbourhood of our own sun, GPI will certainly probe in to regions within the habitable zone.

But like any voyage of discovery, perhaps the best part of all is that we don’t really know what we will find there.

Peter Tuthill receives funding from the Australian Research Council and is a member of the Sydney Institute for Astronomy (SIfA).