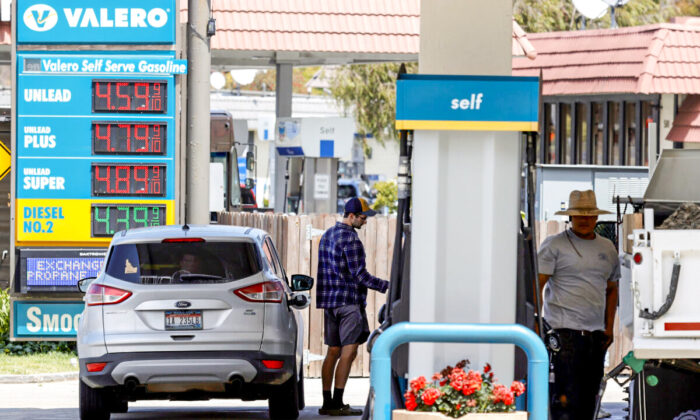 A customer prepares to pump gasoline into his car at a Valero station in Mill Valley, Calif., on July 12, 2021. (Justin Sullivan/Getty Images)
Commodities

The price of gasoline has risen across the United States again as experts warn that more pain could lie ahead at the pumps for Americans.

The average price of a gallon of regular-grade gasoline currently stands at $3.488, an increase of more than 30 percent since the same time last year, when it was $2.505 a gallon, according to data from the American Automobile Association (AAA).

In the last week, the price of regular-grade gasoline has soared nearly 1.4 percent, from $3.441.

According to the latest data from the Energy Information Administration (EIA), total domestic gasoline stocks decreased by 1.6 million barrels to 248.4 million last week.

The rising cost of crude oil, driven by loosening COVID-19 pandemic-related restrictions and economies rebounding from the recession, is also putting continued pressure on prices.

And Americans are set to pay even more at the pumps in the future, AAA warned on Feb.10.

Meanwhile, West Texas Intermediate (WTI) increased by 22 cents to settle at $89.88 at the close of the Feb. 10 formal trading session.

“The current stock level is approximately 13 percent lower than at the beginning of February 2021, contributing to pressure on domestic crude prices,” AAA noted.

Since Feb. 3, the states of Delaware, New Mexico, Maryland, North Carolina, Tennessee, Virginia, New Jersey, Nebraska, Pennsylvania, and Kentucky have seen the highest increases in the price of gasoline.

Customers visiting pumps in Delaware have seen a 22 cent increase in the price of gasoline, according to AAA, while New Mexico follows closely behind with an 18 cents increase. Pennsylvania vehicle owners have seen a 10 cents increase while those in Kentucky are paying 9 cents more.

AAA said that the ongoing tensions between Russia and Ukraine are also contributing to rising oil prices, given that Russia is a member of OPEC+, crude-producing allies of The Organization of Petroleum Exporting Countries (OPEC)

Thus, any sanctions based on their actions toward Ukraine may cause it to withhold crude oil from the global market, AAA said.

However, OPEC has dismissed requests to drastically pump more oil, which combined with the Ukraine crisis has created further instabilities in the market.

Russia has massed some 100,000 soldiers along its borders with Ukraine.

The Biden administration insists that a Russian invasion of Ukraine is imminent and could take place before the end of the Beijing Winter Olympics, which are set to finish on Feb. 20.

Western leaders have promised to apply sanctions on Kremlin officials “the likes of which we have not looked at before,” if President Vladimir Putin invades the former Soviet republic.

“I think we’ve been very clear with Mr. Putin about the economic consequences that could come his way and the way the Russian people should he further incur, invade inside Ukraine,” Pentagon spokesperson John Kirby told Fox News Sunday in January.

“I think we’ve been very, very clear that we’re going to look at sanctions and economic consequences, the likes of which we have not looked at before even considering even as far back as 2014,” he added.

However, the Pentagon spokesperson also emphasized that the current situation “doesn’t have to come to conflict.”

On Feb. 13, Ukrainian President Volodymyr Zelensky invited President Joe Biden to visit Kyiv in what he believes would be a powerful move that could help deescalate and stabilize the situation with Russia.