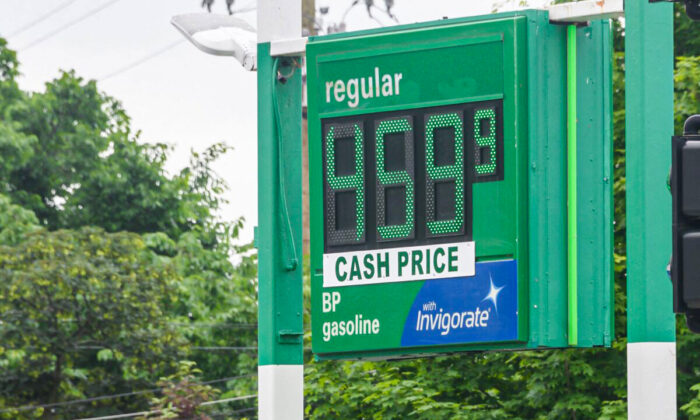 Gasoline prices are posted at a gas station in Washington on May 26, 2022. (Nicholas Kamm/AFP via Getty Images)
Gold and Commodities

Gasoline prices across the United States continued to surge this week, reaching a new record-high of $5.016 a gallon on Tuesday, according to AAA, as experts warn that prices could rise further.

The national average is up from Monday’s price of $5.014 per gallon, which shattered previous records, and up from $3.080 this time last year as Americans continue to fork out more at the pump amid limited fuel supplies and increased demand.

Meanwhile, demand for gasoline grew from 8.98 million b/d to 9.2 million b/d as drivers continue to fuel up their vehicles ahead of the summer period which is expected to put further pressure on demand.

Californians are seeing the biggest price increases at $6.43 a gallon as of June 14, followed closely behind by drivers in Nevada at $5.66, and Alaska at $5.57.

Drivers in the states of Illinois, Washington, Oregon, Hawaii, Arizona, Washington, D.C., and Indiana are among those seeing who are seeing the biggest increases.

Experts warn that more pain could lay ahead for drivers at the pump amid supply issues.

“For now, the upward momentum may slow down, but we are still just one potential jolt to supply away from heading even higher,” said Patrick De Haan, head of petroleum analysis at GasBuddy.

“Gasoline demand, while rising seasonally, is still well below previous records, but remains impressive with prices in all states at record levels. Should the rise in price finally start to slow demand’s rise, we could see some breathing room, but for now, it seems like Americans are proving resilient to record highs.”

According to De Haan, Americans are now spending $730 million more every day on gasoline than they were a year ago, while “June alone could cost Americans $20 billion more to fill their tanks vs last June.”

AAA spokesperson Andrew Gross also noted that Americans appear to still be filling up their vehicles despite sky-high fuel costs, although this may change if prices surpass the $5 dollar a gallon mark, he noted.

“Based on the demand we’re seeing, it seems high prices have not really deterred drivers,” said Gross. “If prices stay at or above $5, we may see people start to change their daily driving habits or lifestyle, but it hasn’t happened yet.”

The price hikes come amid record-high inflation which is costing U.S. households $635 each month, according to the Joint Economic Committee’s State Inflation Tracker. Overall, according to the committee, inflation will cost the average American household an extra $7,620 in the coming year.

Annual inflation in the United States in May came in at 8.6 percent, driven by increases in government spending on pandemic-related emergency programs like the $1.9 trillion American Rescue Plan Act in March 2021, supply chain disruptions, increased consumer demand, and the war in Ukraine.

Continous price hikes for essential items like food and energy along with the Federal Reserve’s monetary policy have prompted concerns among experts of an impending recession.

However, former Federal Reserve Chair Ben Bernanke said on Sunday that Central bank officials have a “decent chance” of executing a “soft landing,” and thus avoiding a full-blown recession.

“A recession is possible. Economists are very bad at predicting recessions, but I think the Fed has a decent chance, a reasonable chance of achieving what [Fed Chair] Jay Powell calls a ‘soft-ish landing;’ either no recession or a very mild recession to bring inflation down, Bernanke said on CNN.

The former chairman did, however, note that the situation could turn sour if oil and food prices don’t stabilize in which case the Fed would need to “crack down much harder,” with its policies to bring inflation down.