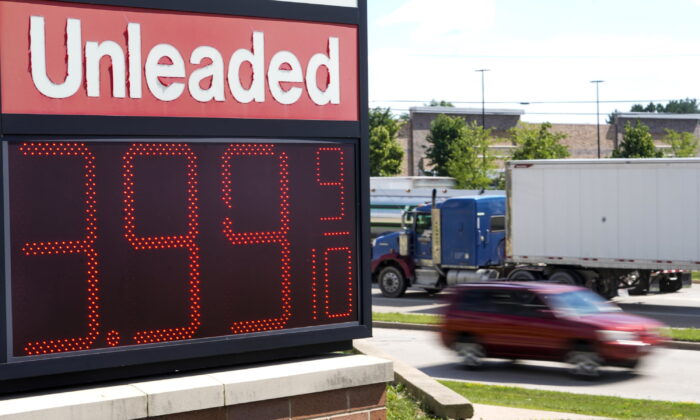 The price of regular unleaded gas is advertised for just under $4 a gallon at a Woodman's, in Menomonie Falls, Wis., on July 20, 2022. (Morry Gash/AP Photo)
Energy

The three-month streak of falling gas prices may be coming to an end after 14 consecutive weeks, as uncertainties regarding crude oil supplies begin to mount.

After declining for 99 days, the national gas average rose slightly, to $3.68 a gallon, on Sept. 21, according to AAA, a sign that fuel costs may begin to rise again.

The sharp decline, after fuel costs peaked above $5 a gallon in June, has recently helped temper overall inflation, making things easier for the Federal Reserve.

Inflation has been an overall challenge for the Fed, which on Sept. 21 announced another large interest rate hike after its policy meeting.

However, some analysts believe that the streak of lower gas prices ended earlier.

“It actually ended some ~40 days ago, according to the most robust dataset on gas prices,” wrote Patrick De Haan, head of petroleum analysts at GasBuddy, in a tweet.

Current average gas prices are down from $3.90 a gallon a month ago, but up from $3.19 at the same time last year.

Another factor reducing fuel demand in the United States is that more people have been altering their driving habits in response to higher gas prices.

Most of the drivers outside of California are currently using less-expensive winter blend gasoline, so modest pump price reductions have occurred.

The End of Cheaper Gas?

The 99-day decline only partly reversed a run of skyrocketing gas prices, which accelerated after Russia’s invasion of Ukraine in February shook the energy markets worldwide.

“All streaks have to end at some point, and the national average for a gallon of gas has fallen $1.34 since its peak in mid-June,” said Andrew Gross, the AAA spokesperson.

The price of gas at the pump is largely set by global oil prices.

West Texas Intermediate crude, the U.S. oil benchmark, was at $83.29 per barrel by midday trading on Sept. 21, after tumbling from a high of more than $120 per barrel in mid-June.

The early summer caused major concern that high gas prices would hinder consumer demand and push the economy into a bad recession, but a jump in increased supply of oil due to the Biden administration’s release of the U.S. Strategic Petroleum Reserve (SPR) alleviated some of those fears.

President Joe Biden’s decision to release some of the reserves in March caused SPR levels to fall to their lowest point since 1984, as its crude stocks fell to 434 million barrels from about 600 million barrels.

“The 27 percent decline this year is already the largest ever for a calendar year by a wide margin, and there’s still three and a half months to go,” noted Charlie Bilello, founder and CEO of Compound Capital Advisors.

The White House has said that it would consider replenishing the SPR once the price of oil falls below $80 a barrel, according to Bloomberg.

However, the Department of Energy told Bloomberg, that any proposed approach to replenish the SPR”does not include any such trigger proposal. As we said then, we anticipate that replenishment would not occur until well into the future, likely after fiscal year 2023.”

Former President Donald Trump refilled the reserve during his term when the price of crude was much lower.

The White House said it is still committed to releasing 50 million barrels from the SPR in November.

Gas Prices and the Midterms

Energy-driven inflation remains one of the biggest political problems for Biden and the Democrats for the midterm elections this November, but gas prices falling below $4 per gallon has reduced some of the pressure.

Inflation still remains at a record high, with rapid increases in costs for goods and services, which led the U.S. economy to contract in the first half of the year.

Recent data from the Federal Reserve Bank of Atlanta predicts that U.S. gross domestic product will have almost zero growth for the third straight quarter this year.

Meanwhile, Biden has been urging oil-exporting countries such as Saudi Arabia to pump more crude, while at the same time attempting to press other countries to cease imports of Russian energy.

He also has accused oil companies for what he considered price gouging, despite leasing the least amount of federal land for drilling since World War II.

Energy futures traders expect oil and gasoline prices, which are volatile and subject to the news cycle, will continue falling over the next year as long as the market is not hit by a sudden turn in global events.