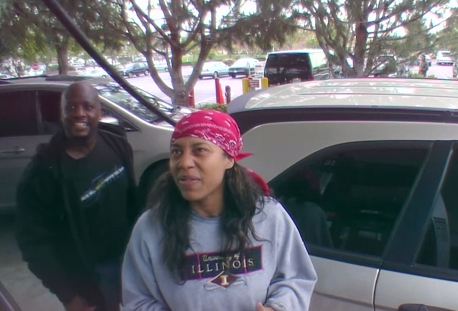 This couple, Will and Monifa Sims, were supposedly surprised by a Tonight Show Pumpcast News segment. (Screenshot/YouTube)
US

A video of a couple singing impromptu karaoke at a gas station in Burbank, California went viral over the last week. But was it staged?

The Smoking Gun reports that the couple, Will Sims and Monifa Sims, founded a theater company in Chicago before relocating to Hollywood, and more importantly, Monifa previously appeared on Pumpcast News.

The viral video features both the Sims engaging with what appears to be a television host, talking to them from a show called Pumpcast News put on by the Tonight Show by Jay Leno. The television host tells them the show will pay for their gas if they sing a song.

Monifa was at the same gas station at the same pump when she first appeared on Pumpcast News more than two years ago, according to the Smoking Gun.

She confirmed this during an interview on The Today Show, saying that “When it happened again, I said ‘I cannot believe it!'”

The couple later appeared on the Tonight Show in person, among other appearances. Their video has been viewed millions of times.

Monifa, who has appeared in film, television (including Criminal Minds) and theatre, said in one of the interviews that she was happy the segment made people laugh.

Could the clip could lead to something bigger? “I hope and pray,” she said. “We are in Hollywood.”

The couple told Leno that they were a bartender and a fitness trainer. Will told the Chicago Sun-Times that the show made up job titles for them.

“[The producers] didn’t want [people] to think we were actors and it was a ‘plant’,” Will says.

There has been much discussion today online about whether the video was staged.

One commentor on The Smoking Gun, John Asendorf, said:

“I’m not buying the conspiracy theory. 1) I’ve gotten my gas from the same gas station, every time, for the past 4 years, and from the one before we moved for 7 years. It’s not odd for someone to buy their gas from the same place repeatedly. 2) She probably did realize what was going on to her husband due to her previous encounter, but I don’t think the show staged it or planned it… I will allow that it is **possible** that the couple had been watching for the segment to be taped again and tried to get on the show though, but… 3) Like Monifa said in her later appearance on the show, if they had planned to be there, she wouldn’t have been in a do rag straight from a workout (which, I’ll also allow, could be a cover for planning to be there…).”

Another, Zy Bobbitt, said that “unless you’re 12 or just plain stupied, it was obviously staged!”