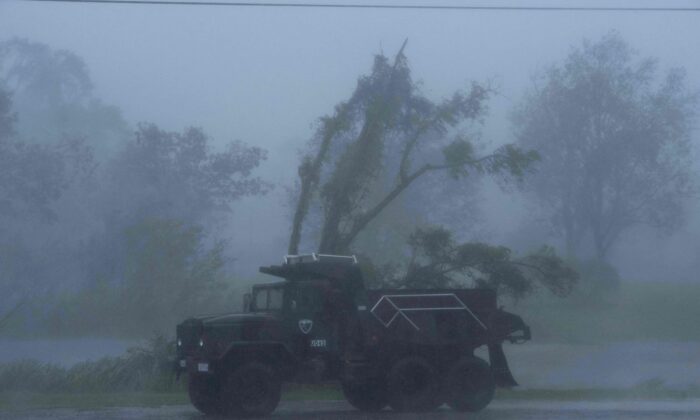 A truck is seen in heavy winds and rain from Hurricane Ida in Bourg, La., on Aug. 29, 2021. (Mark Felix/AFP via Getty Images)
Economy

Hurricane Ida shut down more than 95 percent of the Gulf of Mexico’s oil production, said regulators, suggesting the Category 4 storm will have a significant impact on energy supply and gas prices.

Colonial Pipeline confirmed Sunday it is temporarily shutting down two pipelines between Houston, Texas, and Greensboro, North Carolina, as a precaution due to the storm. They were shuttered “as a precautionary and routine safety measure,” the firm said a statement.

Ida made landfall on Sunday near Port Fourchon, near the Louisiana Offshore Oil Port, which is the largest privately-owned crude terminal in the United States.

Around 94 percent of Gulf of Mexico natural gas production was suspended due to the storm, according to the federal regulator.

“Based on data from offshore operator reports submitted as of 11:30 CDT today, personnel have been evacuated from a total of 288 production platforms, 51.43 percent of the 560 manned platforms in the Gulf of Mexico,” said the agency in a statement on Sunday. “Production platforms are the structures located offshore from which oil and gas are produced. Unlike drilling rigs, which typically move from location to location, production facilities remain in the same location throughout a project’s duration.”

Andrew Lipow, president of Lipow Oil Associates in Houston, told news outlets on Saturday that if the New Orleans refineries take a direct hit from the storm, gas prices will likely rise about 10 cents per gallon in some markets.

Hurricane Ida made landfall as a Category 4 storm with 150 mph winds in southeastern Lousiana, doing considerable damage to infrastructure and causing significant flooding in the region. Hundreds of thousands of people are currently without power in Louisiana, according to Poweroutage.us.

In an update from the Federal Emergency Management Agency headquarters, President Joe Biden said that locals need to take heed of state and local officials’ directions.

“The storm is a life-threatening storm. … And its devastation is likely to be immense. We shouldn’t kid ourselves,” he said. “And so the most important thing I can say right now is that everyone, everyone should listen to the instructions from local and state officials, just how dangerous this is. And take it seriously. It’s not just the coasts. It’s not just New Orleans. It’s north as well. The rainfall is expected to be exceedingly high.”

Biden said he would put “the country’s full might” behind rescue and recovery efforts.