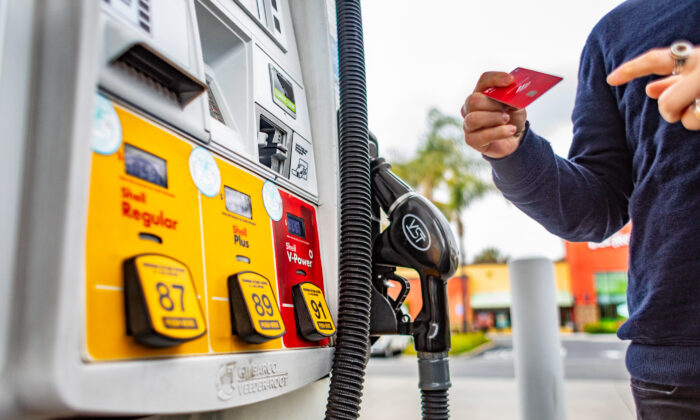 Gas Prices Jump 33 Cents in Past 2 Weeks, Some Analysts See $6 per Gallon by August

The average price of regular-grade gasoline spiked 33 cents over the past two weeks to $4.71 per gallon, according to the Lundberg Survey, which comes as some analysts predict that prices will climb to more than $6 per gallon by the end of the summer.

Industry analyst Trilby Lundberg of the Lundberg Survey said on May 22 that the price jump comes amid higher crude oil costs and tight gasoline supplies.

Nationwide, the highest average price for regular-grade gas was in the San Francisco Bay Area, at $6.20 per gallon, according to the survey, while the lowest average was in Tulsa, Oklahoma, at $3.92 per gallon.

Separate data from the American Automobile Association (AAA) show that in the week between May 16 and May 23, the national average price for a gallon of regular gasoline increased by 11 cents to $4.60.

AAA said in a statement that the current supply and demand dynamic, “combined with volatile crude prices, will likely continue to keep upward pressure on pump prices.”

Data from GasBuddy indicate that the national average price of gasoline in the United States on May 22 was at $4.57 per gallon, up by 10.5 cents from a week ago, according to Patrick De Haan, head of petroleum analysis at GasBuddy.

Another dire gas price prediction came in a note from JPMorgan analysts, who said on May 17 that prices could surge another 37 percent by August to an estimated national average of $6.20 per gallon.

Since mid-April, however, “gasoline inventories have fallen counter seasonally and today sit at the lowest seasonal levels since 2019,” she said.

The U.S. Energy Information Administration (EIA) said in its most recent Short-Term Energy Outlook that global oil inventory levels in April in developed countries stood at 2.63 billion barrels, up marginally from February, when they fell to their lowest level since April 2014.

EIA stated that the Russia–Ukraine conflict has injected greater volatility into oil markets.

“Sanctions on Russia and other independent corporate actions contributed to falling oil production in Russia and continue to create significant market uncertainties about the potential for further oil supply disruptions. These events occurred against a backdrop of low oil inventories and persistent upward oil price pressures,” EIA stated.

Oil prices surged to more than $130 per barrel in March over concerns of disrupted supplies from Russia, although they’ve since fallen.

“Because oil inventories are currently low, we expect downward oil price pressures will be limited and market conditions will exist for significant price volatility,” EIA noted.