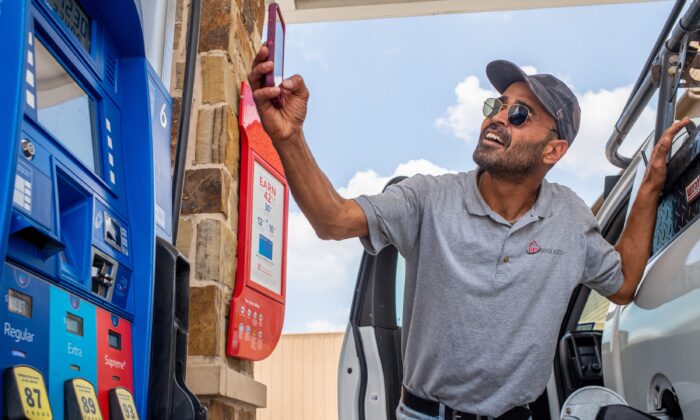 Guy Benhamou sends a picture of gas prices to friends while pumping gas at an Exxon Mobil gas station in Houston on June 9, 2022. (Brandon Bell/Getty Images)
By Bryan Jung

The average price for a gallon of gas in the United States remains below $5, falling for the fourth consecutive day after hitting a high of $5.014 during the week of June 13, 2022.

Demand for gas declined slightly from 9.2 million barrels per day (bpd) to 9.09 million bpd, which has helped to limit price increases.

Average diesel prices are currently at $5.815 per gallon, a slight drop from a high of $5.816 per gallon over the weekend.

The price of benchmark West Texas Intermediate crude fell to $108.85 per barrel by midday on June 20, but as long as crude oil prices remain volatile, gas prices will likely remain elevated.

The Federal Reserve raised interest rates by 75 basis points at its June meeting, with more hikes expected later in 2022.

Average U.S. oil prices dropped by 6 percent to a four-week low on June 17, due to fears that rising interest rates would slow down the economy, leading to a slump in demand.

The EIA predicts that a slowdown in economic growth could cause crude demand to decline, with gas prices following suit.

High gas prices in the United States are unevenly distributed from state to state, depending on the interstate distribution networks, taxes on energy, state regulations, and population demand.

The Biden administration has been receiving fierce criticism from the public for its handling of the national inflation crisis, especially regarding gas and diesel prices, while going into the 2022 midterm elections.

Biden has attempted to shift the blame to the Russian invasion of Ukraine and on the U.S. oil industry for the fuel shortages.

However, the White House has been accused of favoring of “green energy” technology over reliable fossil fuel sources and of curtailing domestic supplies of energy through its policies.

The administration is even reportedly floating the idea of distributing gas rebate cards, the equivalent of a national gas subsidy, to both U.S. citizens and residents.

ExxonMobil slammed the Biden administration on June 15 after President Joe Biden threatened the oil industry with the use of “emergency powers” if the supply of fuel was not increased.

The oil company released a statement, explaining that it had been in “regular contact” with the administration and that it had invested “more than any other company to develop U.S. oil and gas supplies.”

“In the short term, the U.S. government could enact measures often used in emergencies following hurricanes or other supply disruptions—such as waivers of Jones Act provisions and some fuel specifications to increase supplies,” the company said.

“Longer term, government can promote investment through clear and consistent policy that supports U.S. resource development, such as regular and predictable lease sales, as well as streamlined regulatory approval and support for infrastructure such as pipelines.”