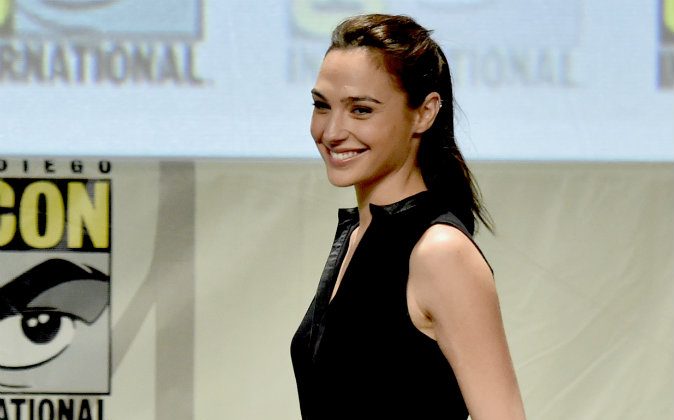 Actress Gal Gadot will be featured as Wonder Woman in the movie. Here, she attends the Warner Bros. Pictures panel and presentation during Comic-Con International 2014 at San Diego Convention Center on July 26, 2014 in San Diego, California. (Photo by Kevin Winter/Getty Images)
Entertainment

Gal Gadot will star as Wonder Woman in Zack Snyder’s Batman vs Superman: The Dawn of Justice, but who is she married to?

The couple got married while Gadot was filming Fast and Furious.

In November 2011, they welcomed their first daughter, Alma, to the world.

He also released a Twitter photo of Gadot in her Wonder Woman garb.

Gadot is known for acting in the Fast & Furious franchise, and also has roles in Knight & Day, Date Night, and appeared once in Entourage.

There is nothing like a good morning workout… 🙂 pic.twitter.com/dUIxKTTKsV

See an AP story about Batman vs Superman at Comic-Con.

The first footage from the Warner Bros. superhero mashup “Batman v Superman: Dawn of Justice” was unmasked Saturday at the pop-culture convention.

The moody, dimly lit footage began with a heavily armored Batman pulling off a tarp and turning on the Bat Signal on a rainy rooftop. With glowing eyes, the bulky Batman looked up to the sky to see a steely Superman — his heat vision just beginning to flare up — hovering within the light and looking down at the Dark Knight.

“I couldn’t be happier with the way everything is going,” said Snyder, who said he came straight to San Diego from the set of the DC Comics adaptation. “Talent, sets, special effects — It’s going amazingly well.”

After the teaser, Snyder brought Batman and Superman actors Ben Affleck and Henry Cavill on stage, along with Gal Gadot, who will portray Wonder Woman in the film. On behemoth screens surrounding the audience, an image of Gadot in costume — complete with thigh-high boots and a sword in hand — was broadcast for the first time.

The actors stayed mum during their brief appearance, which drew roars from the crowd inside Hall H, the biggest venue at the San Diego Convention Center.

“Batman v Superman: Dawn of Justice,” which was first unveiled at last year’s Comic-Con, is set for release May 6, 2016.