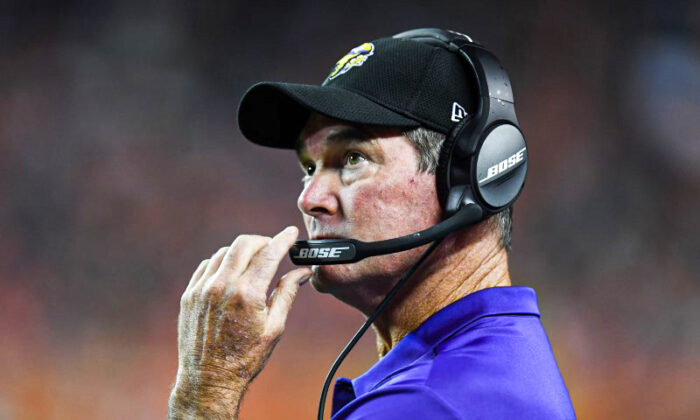 A fully vaccinated player on the NFL’s Minnesota Vikings was taken to a hospital’s emergency room due to trouble breathing after contracting COVID-19, said head coach Mike Zimmer on Wednesday.

“One of our players that was vaccinated, he had to go to the ER last night because of COVID. It’s serious stuff,” Zimmer told reporters, without naming the player. “Like 29 guys are getting tested because of close contact, including myself.”

When asked if the individual’s condition was due to the vaccine or COVID-19 itself, Zimmer said that “it was COVID. I’m not a doctor, but it was COVID pneumonia or something … he had a hard time breathing.”

Anonymously sourced reports, including one on NFL.com, said the player in question is 30-year-old offensive lineman Dakota Dozier. Dozier was placed on the Vikings’ COVID-19 list last week.

Other than Dozier, four other players are on the COVID-19/injury reserve list. That includes starting center Garrett Bradbury and starting safety Harrison Smith.

The Vikings were without the two starters for Sunday’s 34–31 overtime loss at Baltimore. On Monday, the team placed linebacker Ryan Connelly on the COVID-19 reserve list and tackle Timon Parris on the practice squad reserve list.

Earlier this year, due to his vaccination status, a hospital in Cousins’ Michigan hometown said it would drop the quarterback as a spokesperson.

“It’s just a very private health decision, and I’m going to keep it private as such,” Cousins said around the same time. Regarding vaccines, Cousins said the team has a “lot of respect for one another. I don’t think it’ll be an issue.”

This week, fellow NFC North quarterback Aaron Rodgers was dropped by Wisconsin-based Prevea Health over his comments last week about the vaccine.

Rodgers, who said he’s not vaccinated, had publicly questioned why someone who is fully vaccinated should worry about those who are not. The Green Bay Packers quarterback also explained he believes he’s allergic to ingredients in mRNA COVID-19 vaccines and doesn’t trust the safety of Johnson & Johnson shot.