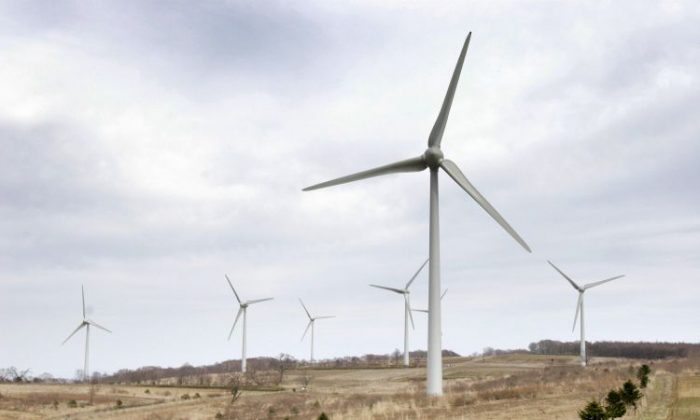 Japan’s devastated Fukushima prefecture may be the site of the world’s first offshore, floating wind farm.

The government announced it would install two 7-megawatt turbines and another 2-megawatt turbine off the coast of the prefecture. Construction of the smaller turbine will begin later this year, and the larger ones will begin in 2013 and 2015.

“Fukushima Prefecture expects this experimental project to spawn a new industry in renewable energy and create employment as part of recovery efforts” in the wake of the devastating earthquake last year, according to a release from Mitsubishi, one of the companies involved in developing the wind farms.

“Through this experimental project, Fukushima Prefecture hopes to develop a large wind farm industry,” it said, adding that the Fukushima project could lead to the construction of more offshore wind farms around Japan.

The Fukushima wind farms would be located around 12 to 25 miles off the eastern coast of Japan.

Fukushima was one of the hardest-hit prefectures in Japan during last year’s devastating March 11 earthquake and tsunami. Workers are still battling to contain nuclear contamination and to decommission the crippled Fukushima Daiichi nuclear plant.

As one of the most nuclear-dependent countries in the world, Japan is looking to diversify its energy supply. Nearly all of Japan’s 54 nuclear power plants were shut down in the wake of the disaster, which has adversely affected its economy, according to a report from The New York Times on Thursday.

Japan has made plans to develop 1 gigawatt of offshore wind-power plants in the Fukushima region, while Japan’s Wind Power Association has estimated that there is a potential to generate 519 gigawatts from wind power across the country, according to Recharge News.

“The Tokyo area has good potential for offshore. It’s easy to get grid connections. The Fukushima nuclear power plants will never operate again so there’s a vacant grid line there,” Yoshinori Ueda, a spokesperson with Mitsubishi Heavy Industries, told the publication.