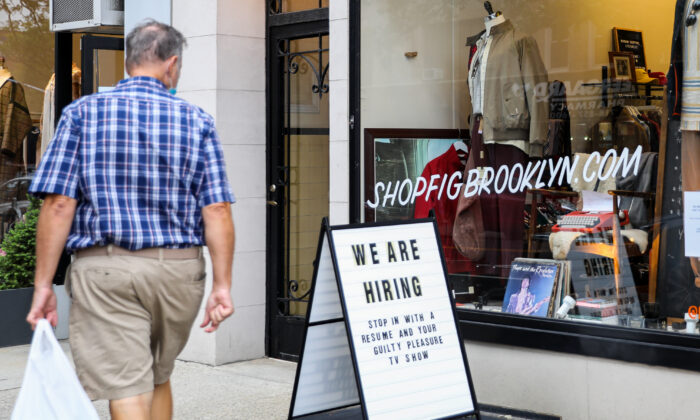 A hiring sign is displayed in front of a store in Brooklyn, New York on October 7, 2020. (Chung I Ho/The Epoch Times)
Economy

WASHINGTON—Following a record downturn, the U.S. economy expanded by 7.4 percent over the prior quarter and at a 33.1 percent annual rate, posting the strongest recovery in recorded history.

The 33.1 percent growth doubles the previous record set back in 1950. Several months ago, economists were expecting GDP to rise between 10 and 15 percent in the third quarter.

The third-quarter growth reflected a robust pace of expansion in consumption, housing, and business investment.

“The recovery that began in the third quarter has been robust enough that coming back from the bottom appears notably less daunting than it did just a few months back,” Ellen Zentner, chief U.S. economist at Morgan Stanley said in a report.

While GDP is mainly backward looking data, it’s encouraging that the economy is rebounding faster than consensus’ expectations, according to Sameer Samana, a senior global market strategist at Wells Fargo Investment Institute.

“It will give the economy more resilience in the face of the current rising headwinds, such as a rise in COVID-19 cases, election uncertainty, and lack of fiscal stimulus prior to the election (and maybe none until 2021),” he told The Epoch Times in an email.

Trump wrote on Twitter on Oct. 29: “GDP number just announced. Biggest and Best in the History of our Country, and not even close.

“Next year will be FANTASTIC!!! However, Sleepy Joe Biden and his proposed record setting tax increase, would kill it all. So glad this great GDP number came out before November 3rd.”

Tim Murtaugh, communications director for the Trump campaign, said in a statement that the record economic rebound is a “validation of President Trump’s policies which create jobs and opportunities for Americans in every corner of the country.”

He highlighted the Trump administration’s policy of “cutting taxes and reducing regulations and red tape,” which he said “clear the way for American ingenuity and our entrepreneurial spirit to thrive.”

Biden, however, reflected a completely opposite view on the economic report.

In a statement, he accused Trump of failing to take action earlier to get control of the outbreak.

“This report underscores three inescapable truths about Donald Trump’s economy: we are in a deep hole and President Trump’s failure to act has meant that Q3 growth wasn’t nearly enough to get us out of; the recovery is slowing if not stalling; and the recovery that is happening is helping those at the top, but leaving tens of millions of working families and small businesses behind,” he wrote.

Consumer spending, which makes up about 70 percent of the U.S. economy, grew by 40.7 percent in the third quarter, led by increases in motor vehicle, clothing, and footwear sales. The growth in private investment (83 percent) was mainly driven by a sharp increase in equipment investment (70 percent) and residential fixed investment (59 percent).

Current‑dollar GDP increased $1.64 trillion in the third quarter to a level of $21.16 trillion, recovering significant loss it recorded due to the pandemic. In the second quarter, GDP decreased $2.04 trillion.

The Commerce Department report also noted that disposable personal income fell by 13.2 percent in the third quarter after surging by 44.3 percent in the second quarter, driven by historic levels of federal stimulus. At the same time, personal savings fell to $2.78 trillion in the third quarter from $4.71 trillion in the preceding quarter. Both figures suggest a drag on consumer spending in the fourth quarter.

Despite strong third-quarter data, the full-year result will likely still be a contraction once the final quarter result comes in, according to forecasters. Economists expect the GDP to grow through the fourth quarter, though more slowly, due to uncertainty surrounding the virus and a possible second wave.

“The V-shaped recovery in the U.S. may start to swoosh in coming months if the latest wave of the pandemic leads to renewed lockdown restrictions,” Ed Yardeni, president and chief investment strategist of Yardeni Research, said in an email to clients.

“Housing-related businesses should continue to boom even during the winter months, but another round of voluntary and enforced social distancing would likely weigh hard on many services businesses that were especially hard hit during the initial wave of the pandemic.”

A separate report from the Labor Department on Oct. 29 also showed that 751,000 people filed for state unemployment benefits in the week ending Oct. 24, a drop of 40,000 from the previous week and the lowest since the lockdowns delivered their colossal blow to the economy in March.

Weekly jobless claims hit a record 6.867 million in March and, aside from several upticks, have fallen ever since. So far, the economy has recouped just over half of the 22.2 million jobs lost during the pandemic.

“New unemployment claims are lower, but hardly in the realm where we can take a great deal of reassurance from the present situation or near-term outlook. There are still some 22.6 million individuals receiving some form of unemployment compensation in the latest week, enough to fill a major American city,” Mark Hamrick, senior economic analyst at Bankrate, told The Epoch Times.