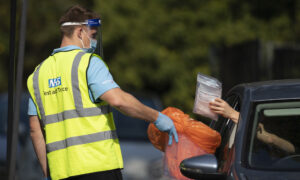 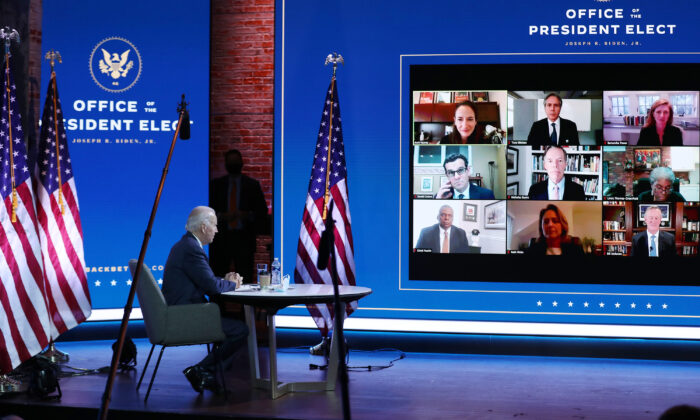 Health and emergency workers on the front lines of the fight against the pandemic told Democrat Joe Biden at a virtual roundtable on Wednesday that they face critical shortages of personal protective equipment and are anxious about what they say is inadequate federal coordination.

Biden, who took part in the Nov. 18 discussion from The Queen theater in Wilmington, Delaware, heard from a firefighter, nurses, and a caregiver, who detailed the challenges facing front-line staff as the CCP (Chinese Communist Party) virus continues to surge.

Anthony Murray, a firefighter paramedic from Hamilton County, Indiana, and a representative for the International Association of Firefighters, said access and availability to personal protective equipment (PPE) remains a key problem.

“It’s so important. It’s vital. This stuff is intended for a single use, it’s disposable in essence,” he said. “And we are wearing personal protective equipment, sometimes over and over again, because we don’t have quite the access that we need.”

“Throughout this pandemic, we’ve had to reuse N95s so many times. Sometimes the masks literally fall off our faces,” she said. “In my hospital, we’re still reusing N95s two times, but I know hospitals that they’re still using eight to 10 shifts. We can’t stay safe when we are using these kind of standards.”

“As a result, nurses are getting sick,” Turner said.

“We need to have optimal PPE for all staff to prevent airborne and droplet transmissions,” she said. “We need testing of our workers and patients and contact tracing, and notification of exposure for health care workers,” she said. Turner called for greater protection for staff and patients, including isolating COVID-19-positive patients from the general population and letting exposed or infected staff quarantine at home without loss of pay.

“Our hospitals have not been providing these basic protections,” she said. “This is why it is so critical for the federal, state, and local governments to step in to ensure that nurses are protected.”

“Remember, there is no second line of defense,” she said. “It’s us.”

Murray said hospitals and health care facilities get priority access to PPE stockpiles, but fire departments and emergency responders are often forced to seek supplies on the open market.

“Obviously, there’s a cost to that as well,” Murray said.

“And as we progress through this pandemic, and we’re seeing numbers surge, we’re going through more and more PPE,” he said, noting increased rates of exposure by front-line workers, with more having to quarantine, putting additional strain on remaining staff already stretched thin.

He also called for priority access to a COVID-19 vaccine for front-line staff.

“I think that that’s really important. And it has to be identified as a resource for us so we can continue to deliver these vital services when people need us the most,” he said.

If he prevails in the contested election, Biden has vowed to invoke the Defense Production Act to ramp up manufacturing and distribution of PPE, and to impose mandatory workplace safety rules to protect workers from exposure to the virus.

As President Donald Trump’s legal challenges to the election work their way through the courts while Trump maintains he won the presidential race, Biden and his team have been working on raising their level of pandemic preparedness.

Biden’s team is planning to meet with pharmaceutical companies this week to determine how best to distribute at least two vaccines to hundreds of millions of Americans.

The Epoch Times has not yet called the presidential race, opting to wait until legal challenges are settled and the Electoral College votes.