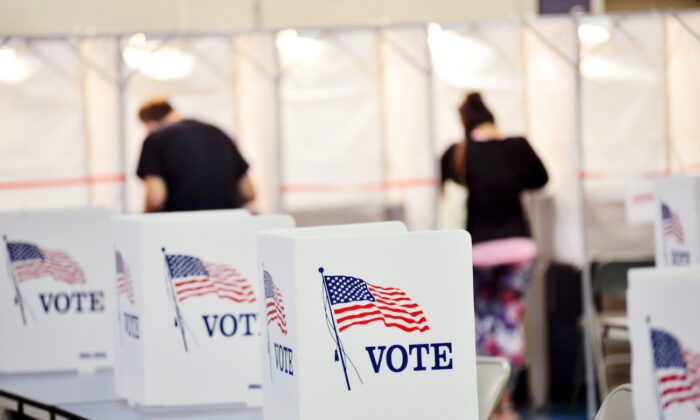 When Hayden Ludwig and a colleague showed up at the Civic Participation Action Fund’s (CPAF) Washington, D.C., office in 2019 seeking copies of the group’s most recent tax returns, they were greeted by an angry Stephen McConnell.

McConnell, then-CPAF’s president, demanded to know who paid his inquisitors’ salaries. Ludwig identified himself as an investigative researcher for the Capital Research Center (CRC), and his colleague as an intern there.

Ludwig also reminded McConnell that federal regulations require groups like CPAF and CRC to provide the documents on request. At that point, Ludwig said McConnell cooled down and produced the documents.

“They’re not used to being in the limelight,” Ludwig laconically told The Epoch Times on Oct. 22.

Indeed, throughout its carefully planned five-year lifespan, CPAF flew under the radar even as it spent millions of dollars from anonymous overseas donors on campaigns to boost Democratic registration and voting in highly-targeted neighborhoods in the 2018 and 2020 campaigns.

The CPAF story illustrates how hundreds of billions of anonymous dollars have been poured into a galaxy of liberal Democratic causes and campaigns in recent years via nominally non-partisan philanthropic foundations and advocacy groups.

Atlantic Philanthropy is an offshore complex of closely related foundations based in Bermuda and established by American entrepreneur Chuck Feeney, who made his fortune with the Duty Free Shoppers line of retail stores. Atlantic received $1.6 billion when Feeney sold his interest in the stores in 1997.

Atlantic Philanthropy channeled nearly $50 million to CPAF in 2015 via Atlantic Advocacy Fund, one of its associated groups. McConnell was Atlantic’s U.S. Director before starting CPAF. The group also received funds from other liberal Democratic sources, including $367,000 from George Soros’ Open Society Foundation.

The plan from the outset was that CPAF—a “limited life initiative”—would complete its mission in time for the 2020 presidential election.

“Due to technicalities of American foundation law, since it is organized offshore, Atlantic Philanthropies is permitted to fund 501(c)(4) advocacy activities, which American-based foundations cannot,” according to CRC’s Influence Watch. Names of individual donors behind funding sources remain anonymous.

Ludwig’s outfit, which is on the opposite side of the political spectrum from CPAF, penetrated the secrecy, however, when CRC obtained a copy of the group’s organizational plan from 2015.

The author of the plan, Bill Roberts, who was then a member of CPAF’s board of directors, had neglected to switch off the “track changes” function, which allowed anybody subsequently viewing the document to see who changed what, when, and how.

“And the tracked changes reveal an entire arsenal of tactics that left-wing non-profits use to conceal partisan intentions behind walls of philanthropy and intentionally milquetoast words such as ‘civic engagement,’” CRC’s Parker Thayer—the intern who had accompanied Ludwig—wrote in an October 9 analysis.

Among the changes, for example, was the following:

“Although much more work is needed to flesh out a full plan, particularly on the important challenge of program implementation, the quantitative analysis is intriguing and the potential voter participation outcomes are enormous.”

At another point, Roberts—who was also a principal of the Corridor Group, an influential Democratic consulting firm—observed that “voter participation by people of color has improved somewhat in recent years but their continued absence from the political process has almost certainly had a skewed impact on both elections and policy.

Again, Roberts’ additions are italicized. It should be noted that all three examples he cited were narrow Republican victories in Florida, Nevada, and Arizona. More voter participation by individuals believed to be likely Democratic supporters would have produced Democratic wins.

In a third edit, Roberts wrote that “the program has the potential to impact policies affecting millions of citizens and

In other words, the CPAF plan could change election results and the resulting increase in Democrats elected would open up the spigots of federal tax dollars for liberal policy causes.

What Roberts did not change was the plan’s projection of its impact on 12 key states if properly funded, according to Thayer.

“The 2018 projections estimate that the program would generate nearly one million new ‘non-white’ votes; 293,000 from African-Americans and 520,000 from Hispanic-Americans. The 2020 projections … anticipate more than doubling the 2018 numbers to an estimated 2.4 million new votes,” Thayer wrote.

The projections also pointed to the prospect that the additional voters would be sufficient to change previous election outcomes in nine of the dozen key states.

One such group, Arizona Wins, which got $437,675 from CPAF, played a major role in Sen. Kyrsten Sinema’s (D-Ariz.) narrow win over Republican Martha McSally in 2018.

Neither McConnell nor Roberts could be reached for comment, while Atlantic Philanthropies completed its grant-making and closed down its media office earlier this year, according to a recording on the foundation’s main telephone line.