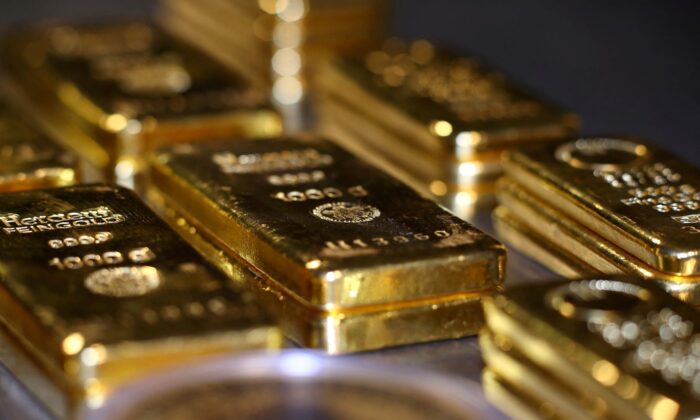 Gold bars and coins are stacked in the safe deposit boxes room of the Pro Aurum gold house in Munich, Germany, on Aug. 14, 2019. (Michael Dalder/Reuters)
Markets

From Bitcoin to Gold: A Peek at Real Assets in 2022

Many assets, from Bitcoin to natural gas to wheat, enjoyed a tremendous rally in 2021. Can these assets repeat their strong performances in 2022?

This past spring, there was a lot of chatter about a commodities supercycle, a prolonged period of sky-high prices amid immense global demand. But some of these components, such as soybeans and copper, took a breather in the third quarter. However, many of the agricultural, energy, and metal markets were heating up in the final couple of weeks of 2021.

Market analysts have been looking ahead to 2022 to see if these assets can carve out a path of notable gains or if they’re more likely to experience a downward trend.

Gold didn’t shine in 2021, as the yellow metal slumped by about 5 percent, finding support at around $1,800 per ounce.

Despite inflation surging to a 39-year high, gold prices fell on a strengthening U.S. dollar, a rebounding economy, and expectations for monetary policy normalization.

Although gold is still considered a safe haven asset, financial experts believe that the younger generation of investors is utilizing cryptocurrencies as a store of value.

“While gold will clearly remain an established safe-haven asset in times of economic turmoil, it’s clear that younger generations (and increasingly the older ones too) are now looking to bitcoin to serve the same purpose in a digital era,” David Beatty, an analyst at deVere Group, wrote in a note.

Credit Suisse is forecasting that gold prices will hold at about $1,850 in 2022, but they could tumble to $1,600 as central banks raise interest rates.

“On interest rates, the consensus view appears to be potentially multiple rate hikes by the Fed in 2022 (following the completion of its bond tapering program), but there is uncertainty in terms of how high rates could actually go, given record levels of national debt,” said Fahad Tariq, precious metals analyst at the Swiss bank.

“Risks to our view include a more hawkish Fed, return to normalized inflation, substitution effect with cryptocurrencies, and lingering weakness in retail demand for gold.”

A rising-rate environment is typically bearish for gold because it lifts the opportunity cost of holding non-yielding bullion.

Will the Crypto Craze Persist in 2022?

It was a roller coaster ride for the cryptocurrency market over the past year. The crypto sector was filled with plenty of highs and lows, eclipsing $2 trillion in value.

Ethereum also surged and flirted with $5,000 before sliding to less than $4,000. With a more than 400 percent spike, it’s now the second-largest cryptocurrency.

But where will Bitcoin and other cryptos head over the course of 2022?

Financial experts contend that Bitcoin has stabilized, with many investors viewing the digital currency as a store of value in an inflationary environment. Many market analysts are referring to Bitcoin as “digital gold.”

Another factor that industry observers are discussing is regulation. Experts say the Securities and Exchange Commission ostensibly wants regulatory jurisdiction over crypto.

Overall, whether it’s greater federal scrutiny or institutional investors hopping on the Bitcoin bandwagon, the consensus is that the public shouldn’t expect massive gains in cryptocurrencies comparable to 2021.

According to the Energy Information Administration (EIA), crude prices are projected to average about $70 per barrel, citing lower demand and increased production.

But some financial institutions are expecting much higher prices in 2022.

JP Morgan Global Equity Research anticipates that oil prices will reach $125 per barrel in 2022 amid capacity-driven shortfalls in output by the Organization of the Petroleum Exporting Countries (OPEC) and its allies, OPEC+.

“We think OPEC+ will slow committed increases in early 2022, and believe the group is unlikely to increase supply unless oil prices are well underpinned,” analysts said.

The Bank of America estimates that a barrel of West Texas Intermediate oil will trade at $85 in 2022 and could overshoot $100 if air travel rebounds. It expects Brent crude, the international benchmark for oil prices, to top $120 per barrel by June.

Due to Omicron coronavirus variant concerns that could trim global demand, Morgan Stanley has slashed its oil price forecast for the first quarter of 2022 to $82.50, down from $95 in its previous estimate. But the bank thinks Brent oil prices could hit $90 per barrel by the third quarter.

“Brent prices rising above recent highs again is probably something from mid-2022 and beyond,” Morgan Stanley analysts wrote in a note.

In other industry news, worldwide oil and gas discoveries hit their full-year lowest levels in more than seven decades in 2021, according to a Rystad Energy analysis.

“Although some of the highly ranked prospects are scheduled to be drilled before the end of the year, even a substantial discovery may not be able to contribute towards 2021 discovered volumes as these wells may not be completed in this calendar year. Therefore, the cumulative discovered volume for 2021 is on course to be its lowest in decades,” Palzor Shenga, vice president of upstream research and analysis at Rystad Energy, wrote in a note.

More Volatility Ahead for Natural Gas

In its December Short-Term Energy Outlook (STEO), the EIA projected that U.S. natural gas production would increase to 97.5 billion cubic feet per day by December 2022—a fresh all-time high.

But analysts say that other industry fundamentals could drive prices over the next 12 months, leading to another year of volatility: winter conditions in North America and Europe, strengthening liquefied natural gas demand in Asia, the geopolitical developments involving Russia, and international inventories by the second quarter.

As domestic stockpiles remain 2 percent below the five-year average for this time of year, the EIA stated that natural gas spot prices will continue to be in the $4 range “before downward price pressures emerge.”

Running of the Bulls in Agriculture?

In recent months, crop prices have had a terrific year despite some weakness at the start of the fourth quarter. Wheat surged by 21 percent, soybean climbed by 4 percent, and corn advanced by 24 percent.

Recent developments suggest that they could have another strong year ahead.

The agricultural commodities market staged a year-end rally in the home stretch of 2021, buoyed by growing weather concerns in South America. Soybean and corn crop harvests are expected to be smaller than initially forecast due to unfavorable heat and dryness in southern Brazil. Some believe a La Nina weather pattern could extend these conditions that would further affect crops.

In the United States, warm and dry conditions could threaten yield prospects for winter wheat in the plains.

But Argentina could offset any potential declines in domestic production of wheat with one of the world’s largest wheat exports. The country is projected to enjoy a record crop of 21.5 million tons, up from its previous median estimate of 21 million tons.

On the demand side, Russia has raised its export taxes again, Iraq and Egypt have made immense purchases, and Chinese wheat imports have increased to their highest levels in 20 years.

This has money managers and commodity funds becoming net buyers of corn and soybeans heading into 2022, according to data from the Commodity Futures Trading Commission (CFTC).

Terry Reilly, a senior commodity analyst at exchange brokerage group Futures International, sees soybean prices trading in the range of $11 and $13.50 by the end of 2022.

“The key challenges will be how much of U.S. soybeans could be exported to China,” Terry said in an interview with S&P Global. “With Brazil’s soybean harvest starting as early as mid-January, U.S. exports could significantly slow around that time.”

Corn is being penciled in for a range of $5 to $6 per bushel, as the break-even price to cover total output costs is $4.73 a bushel.