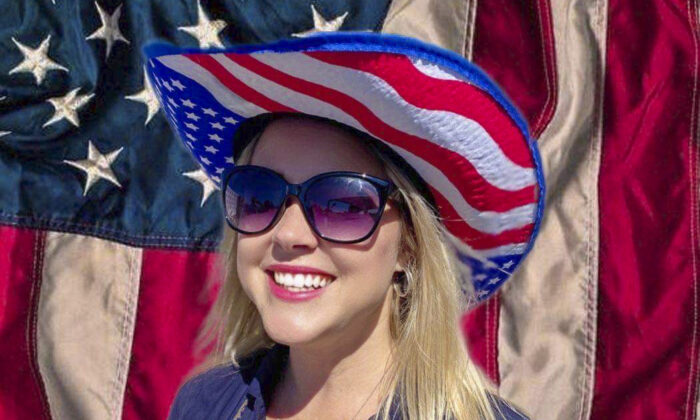 ‘A Fighter for Rule of Law and American Freedom’: Friends Mourn Kelly Ernby

Correction: A previous version of this article did not state Kelly Ernby’s cause of death, which has been widely reported as COVID-19 complications. The Epoch Times regrets the error.

Kelly Ernby was known to the public as an OC Deputy District Attorney, but her loved ones remember her as being a strong force that was full of life with a warm embrace.

Ernby was 46 years old when she died from possible complications of COVID-19 on Jan. 3. According to media reports, she had contracted the virus shortly before she died.

Lisa Foster said she met Ernby when she moved into the same apartment complex about six years ago. During an interview with The Epoch Times, Foster let out a laugh recalling the day Ernby moved in.

Before setting eyes on Ernby, Foster said she saw Ernby’s father moving a wine refrigerator into her apartment. She said she stopped him to joke that she and his daughter were going to be best friends.

Not long after that, Foster invited Ernby to dinner via a note on Ernby’s front door—a note that Ernby would cherish in the years to come.

Years later, Ernby told Foster that she held onto the dinner invitation in awe of the gesture.

At the time, Ernby was in a lonely place and clinched onto the joy that somebody wanted to be her friend, Foster recalled while holding back tears.

“She said for somebody to want to be her friend, she’d never forget it,” Foster told The Epoch Times.

Every Sunday, Foster, Ernby, and other friends would attend Mariners Church and grab lunch together to catch up on their week.

On the days they would go out walking to grab cocktails, Ernby would insist her friends all hold hands until they reached their destination.

She wanted her friends to feel loved, cherished, and known, Foster said.

“That’s the kind of person that she was, just lovely, passionate, and loving,” Foster said. “She had [a] very high Christian faith and we do not doubt that she is in heaven waiting on us.”

Mary O’Donnell met Ernby through Foster and bonded immediately over their similar past of growing up in military families while living in San Diego.

“We had a connection very early on,” O’Donnell told The Epoch Times.

Their adventures continued a year later when the couples found themselves in New York on Saint Patrick’s Day watching the celebrations and parade on Fifth Avenue from the top of the Peninsula Hotel.

“A lot of adventures,” O’Donnell said. “She was a loving and fun person.”

Aside from their spontaneous trips, O’Donnell said she admired Ernby’s ability to give her undivided attention to those she spoke with, making it easy to connect with those she encountered.

Ernby’s core values and priorities were rooted in her faith and loved ones with work following shortly behind, friends said.

The last time O’Donnell saw her was when Ernby attended her November birthday celebration. The pair were supposed to meet up a few weeks after but delayed the occasion due to the series of storms that passed through the state in December.

“I feel like she still had a ton of life left in her,” O’Donnell said.

While her friends received 100 percent of her attention while in her presence, so did Ernby’s work.

Mike Netter met Ernby about a year ago when he started to become engaged with state politics. Netter recalled Ernby’s enthusiasm for the causes she supported and her genuine interest in each event she attended.

“She was genuinely humble, passionate, and engaged,” Netter told The Epoch Times.

Sky Jones met Ernby about a year ago volunteering with the Republican Party of Orange County. Ernby served on the OC GOP Center Precinct Committee since 2020.

Upon her first interaction with Ernby, it didn’t take long for Jones to know that she was special and down to earth.

Jones spoke about Ernby as if she were still alive, recalling her warmth and embrace.

“She is a supportive and loyal friend, who is full of life and full of energy all the time,” Jones told The Epoch Times.

Ernby was often surrounded by many, but she was personable with those she interacted with, Jones said.

While serving on the OC GOP, Ernby worked with a multitude of volunteers whom she cared deeply about.

Fred Whitaker, Chairman of the Republican Party of Orange County recalled Ernby’s ability to help volunteers find positions to serve in the areas where they were most passionate.

Before her death, Ernby had hoped to put together a team appreciation event for OC Republican Party volunteers.

“She cared about everyone that was volunteering and she wanted them to feel loved,” Jones said.

The event was to occur in February.

She received an award in October 2021 on behalf of the Hispanic community and her work to reach Hispanic conservatives.

A high school volunteer with the Republican Party of Orange County remembers Ernby as being a “fighter” for freedom.

“She always carried a flame of joy wherever she went, a perfect exemplar of a fighter for the rule of law and American freedom,” she said.

She is survived by her husband, Axel, and dog, Nixon.