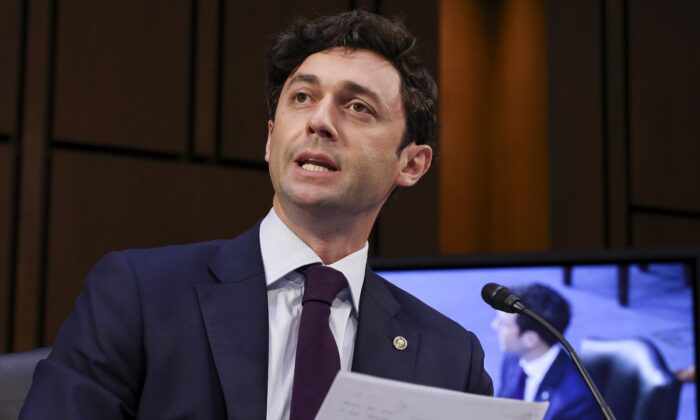 The more people “virtue signal” the more the facts become obscured or irrelevant. Common sense is abandoned in favor of self-righteousness. Often the ramifications are significant.

One example right now is Georgia freshman Senator Jon Ossoff who has led the way for twenty-seven other fellow Senate Democrats on the signing of a statement calling for an “immediate ceasefire” to avoid further loss of life in what he calls the “conflict in Israel and the Palestinian territories.”

Israel? The Palestinian territories? Where’s Hamas in all this? A curious omission, no, since they (with their cohorts in Islamic Jihad) are the ones currently attacking Israel? Why wouldn’t Ossoff be addressing them as well in calling for a ceasefire, since those do the most, or all of the firing from the Palestinian end—and random at that, hoping to hit civilians.

Because it would call attention to something embarrassing about his solemn declaration.

Hamas is a terrorist organization, has been labeled as such for years, that swears, according to its very own hyper-Islamist charter, rivaling ISIS, to kill all Jews everywhere—I’m assuming Ossoff, raised as a Jew himself, knows that—and, as the night follows the proverbial day, completely destroy the state of Israel.

This is a group for whom the vaunted “two-state solution” so embraced by the Western world is complete anathema. (This is also sadly true of the Palestinian Authority in the end. When offered practically everything he asked for by Ehud Olmert, their then leader Mahmoud Abbas walked away, just as Yasser Arafat did years before with Ehud Barak and Bill Clinton.)

To mention Hamas’ name in particular might “slightly” undermine Ossoff’s “virtuous” argument. But then who will cease the firing they are asking for, speaking of common sense?

Further to the common sense question, or the abandonment thereof, at this moment Israel is dealing with plus or minus one hundred miles of underground tunnels the IDF dubs the “Metro” Hamas has constructed under Gaza, much at considerable depths with unfathomable amounts of concrete.

Meanwhile, it is being trumpeted all around the current conflagration was caused by Israel because of an undecided real estate dispute in a small Jerusalem neighborhood (Sheikh Jarrah) and, worse yet, because the Israelis were about to take back the Temple Mount and lay waste to the Al Aqsa mosque—an absurd lie that is trotted out every few years for purposes of maximum incitement.

Now to the next common sense question: Just why was Hamas constructing these vast protective tunnels for years, at such a huge expense they could have turned Gaza into a Mediterranean beachfront paradise had they chosen to spend even a part of their billions in aid on their people instead, had they not intended to use these tunnels to attack Israel—and then defend themselves against the inevitable response—at a time of their choosing?

So why now? Why was this the moment to endure the unintended consequences (or are they really intended because useful?) of the inevitable Gazan civilian deaths no matter to what lengths the Israelis go to avoid them.

That’s a question moral narcissists of Senator Ossoff’s Democratic Party ilk dare not ask, because in high probability, it has a lot to do with the change in U.S. administrations. They feared Trump and thought the Biden administration would be more “even-handed” (i.e., forgiving of terrorism) in its response.

Perhaps Hamas was right because, as I write this, the Daily Mail is reporting Biden putting pressure on Netanyahu by supporting a ceasefire.

Also operative is the ongoing struggle between Hamas and the Palestinian Authority for political domination over the Palestinians. Hamas had and has a vested interest in stirring up trouble to make Abbas and the PA look weak and ineffectual in order for Hamas to take over the West Bank and extend their reign of terror.

All this raises another common sense question for the “good” Mr. Ossoff. Suppose Benjamin Netanyahu took your admonition to heart and declared a ceasefire tomorrow? Then what?

How long would Hamas take to see that as weakness, declare themselves the winner and act accordingly? (Somewhere between one and two seconds.)

More important than the propaganda aspect, how long would it take for them to regroup, rebuild their tunnels, and start firing missiles at Israel again, aiming for her destruction, just as their charter pledges?

Well, that depends but only a matter of a few years, possibly less, even a lot less. Hamas has powerful backers (Iran, China, Russia, now Turkey) willing and able to replenish their weaponry and rebuild their defenses.

In fact, those allies could, as Biden might put it, “build them back better”—new tunnels with better reinforcement, new long-range missiles with bigger payloads—this time with GPS enabling them to really hit their targets—advanced submersibles to attack underwater oil rigs and so on.

With some sadness, I suspect, Israelis calls what they are now engaged in as “mowing the lawn.” The question always arises how to stop that terrorist lawn from coming back. Do you pull it up by the roots? No one as yet has found the answer—or answers—short of things people are normally reluctant to do.

But moral narcissists like Ossoff and his Senate Democrat friends are not helpful in such a situation, except, I suppose, to themselves. They don’t come close to solving the problem, or even addressing it, in their virtue signaling.

Some degree of hard reality is necessary before you say, as someone said before in one of the most famous examples of virtue signaling ever, “There will be peace in our time.”