French President Fires Back at Biden for Warning of Nuclear ‘Armageddon’ 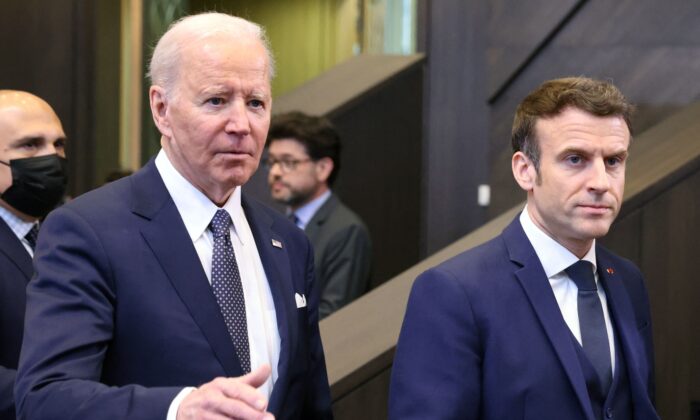 “We must speak with prudence when commenting on such matters,” the French leader said, adding, “I have always refused to engage in political fiction, and especially … when speaking of nuclear weapons.”

“On this issue, we must be very careful,” Macron said at a conference in Prague over the weekend, according to reports.

Biden last week stated at a Democrat fundraiser that Kremlin leaders’ recent warnings about the use of nuclear weapons in Ukraine had brought the world closer to “armageddon” than at any time since the Cold-War Cuban Missile Crisis in the early 1960s.

In an attempt to clarify Biden’s remarks, White House spokesman John Kirby told ABC News on Sunday that his “comments were not based on new or fresh intelligence or new indications [Russian President Vladimir] Putin has made a decision to use nuclear weapons and, quite frankly, we don’t have any indication that he has made that kind of decision.”

“Nor have we seen anything that would give us pause to reconsider our own strategic nuclear posture in our efforts to defend our own national security interests and those of our allies and partners,” Kirby said.

“Threats will not intimidate us,” Michel said. “Instead, we are going to remain calm. We are going to keep cool heads and we will, each time, denounce the irresponsible character of these threats.”

According to reporters who were at the fundraiser, Biden said Putin was “not joking when he talks about potential use of tactical nuclear weapons or biological or chemical weapons” and added that “we have not faced the prospect of Armageddon since Kennedy and the Cuban missile crisis.”

Following his comment, the White House has been repeatedly pressed over whether Biden’s statement was a reflection of an update to the United States’ nuclear posture.

“Russia’s talk of using nuclear weapons is irresponsible and there’s no way to use them without unintended consequences. It cannot happen,” Jean-Pierre said last week.

Putin said in an address last month that Russia would use “all available means” to defend its territory, although he did not specifically make reference to nuclear weapons. Other Russian officials, however, did specifically float the idea of using nukes in the Russia–Ukraine conflict.