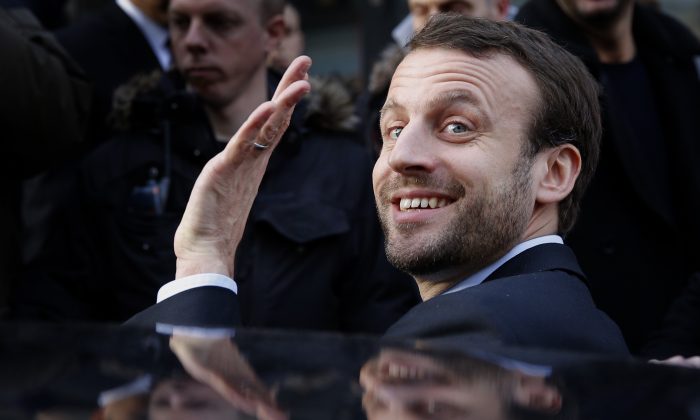 French Economy Minister Emmanuel Macron waves as he leaves after a visit to a shopping center on the first day of the winter sales in Paris on Jan. 6, 2016. (AP Photo/Christophe Ena)
Business & Economy

SAN FRANCISCO—France’s economy minister wants global investors to know that the country known for handcrafted cheeses, wine and luxury apparel—all of which take time to make—is ready to speed up in order to embrace technology’s startup culture.

Socialist Emmanuel Macron told The Associated Press in an interview on Friday that his top priority in 2016 is to attract private investment to the country’s fledgling yet growing tech industry.

To do so, he’s emphasizing to investors and technology executives in the United States that his country has relaxed some of its famously stringent workplace protections and will do more so that companies can restructure or lay off workers in order to be more nimble and competitive.

“We have to provide more visibility, more certainty to the investors and reduce the cost of failure,” he said, speaking before a reception at the French Consul General’s home near San Francisco’s Haight-Ashbury district.

Macron, 38, is an unabashed admirer of tech innovation and competitiveness, making him a controversial figure within a party where opponents fear he is pushing the country toward an American-style model that doesn’t do enough to protect workers.

In July, for example, the French government approved an economic reform bill championed by Macron. Among other things, the law allows stores to open 12 times a year on Sunday instead of five and lets stores expand evening hours. France’s 35-hour workweek law was unaffected.

“At the same time, what we have to do in France is to adapt the country to globalization and we have to accelerate, because everything is about speed,” Macron said.

Macron has spent the past two days at the annual gadget extravaganza known as the Consumer Electronics Show in Las Vegas. He noted there were nearly 200 French startups at the show, the most of any European country, he said.

He said France creates about 1,500 startup companies each year, many in health care, energy and mobility. On his lapel, he wore a small red rooster pin, the official symbol of “La French Tech.”

He met with entrepreneurs and investors in Silicon Valley and San Francisco on Friday and has scheduled more meetings for Saturday, before heading home.

Asked if he had a message for people at home, Macron said he was impressed by the relentless drive for innovation and speed seen in investors and executives, even those already considered successful.

“My key message is be innovative, be ambitious, think global and big on day one,” Macron said. “Otherwise you have people here thinking global for you.”