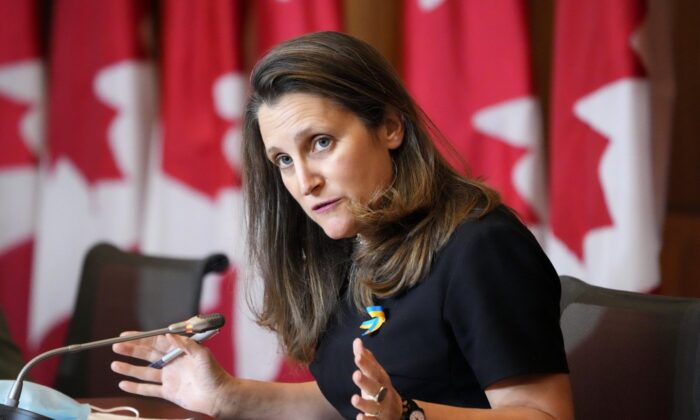 Deputy Prime Minister and Minister of Finance Chrystia Freeland speaks at a press conference in Ottawa, on March 1, 2022. (The Canadian Press/Justin Tang)
Canada

Deputy Prime Minister and Finance Minister Chrystia Freeland laid out her government’s plan to address inflation and cost-of-living issues at a noon hour address in Toronto on June 16, detailing $8.9 billion in spending based on already-announced commitments.

Freeland said the $8.9 billion in spending required had already been laid out in previous budgets. These measures include:

“But if the data is so rosy—if the rebound is so strong—why don’t we feel very good? Why are Canadians so worried? Everyone here knows the answer—inflation,” Freeland said.

Conservative leadership hopeful Pierre Polievre has criticized the Bank of Canada and the Liberal government for not curbing inflation. Although Freeland did not mention Poilievre, her comments offered a response.

“At this time of global economic and political volatility, undermining Canada’s fundamental institutions—very much including the Bank of Canada—is highly irresponsible, not to mention economically illiterate.”

Freeland said the federal investment in skilled workers would help supply chains and bring more Canadians into prosperity. She also said agreements had been made with all provinces on early learning and child care.

“Taken together, immigration, housing, skills, and child care are, quite clearly, social policies. But they are economic policies, too,” Freeland said.

“This set of measures will help drive our continued economic growth in a way that fights inflation by increasing the supply of the workers—and homes—that we don’t have enough of.”

Freeland expressed hope that the Canada Growth Fund and a new agency for innovation could help tackle ‘the productivity challenge that is Canada’s Achilles heel…Canadians have been handwringing about productivity for at least three decades, and we can’t seem to make a difference.”

Freeland, who sits on the board of the World Economic Forum, said all countries were undergoing “the most profound economic shift since the Industrial Revolution.” She said the post-Cold War world order begun in 1989 ended when Russia invaded Ukraine on February 24.

“A dramatically changing world offers historic opportunities for Canada, tomorrow and in the years ahead… The future of the global economy does not belong to those who believe that the size of their armies, or the harshness of their censors, or even the extent of their natural gas reserves will allow them to act with impunity.”

“Now, given the uncertainty in the global economy, would it be wise for me to stand here and rule out the need for further support in the future? Of course not,” she said.

“Canadians are in the grip of a cost-of-living crisis because of the flawed tax-and-spend approach of the Trudeau Liberals,” said the statement.

“This flawed economic approach eats away at the earnings of hard-working Canadians and ignores the most basic principle of economics: that spending during an inflationary crisis will only fuel inflation further. Yet, the Liberals continue down this path with reckless abandon, inflicting more inflationary pain on Canadians.”

Editor’s note: A previous version of this article misstated the total federal spending figure. The total sum is $8.9 billion. The Epoch Times regrets the error.