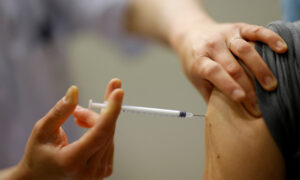 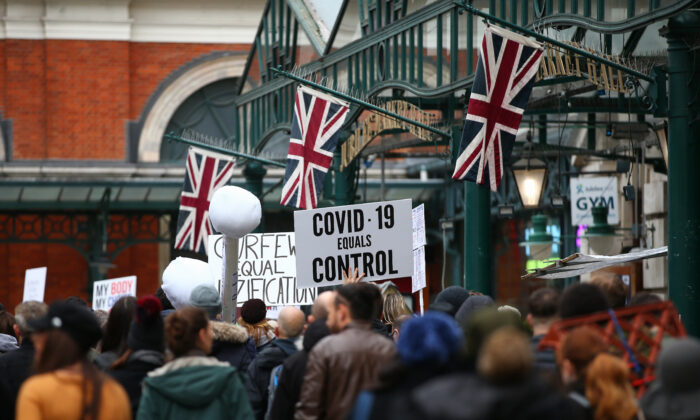 Freedom Day for Brits—Well, Not Exactly

Monday July 19 has been named “Freedom Day” by Boris Johnson, as that is when the COVID-19 restrictions he imposed on the British people over a year ago are supposed to be ending. Except everyone here already knows this is not going to happen.

The government will no longer legally enforce restrictions on social distancing and mask-wearing, but Johnson hopes that people will continue them anyway out of a sense of civic duty, and if shops and transport services want to encourage them to do so that is fine by him.

The food retailer, Sainsbury’s, will inform shoppers through signs and loudspeakers that they should still wear face coverings. Its chief executive, Simon Roberts said, “Our colleagues’ safety is vital and many of our colleagues would feel more comfortable if those who can wear face coverings continue to wear them.”

The far-left Mayor of London, Sadiq Khan, has announced that people will still need to wear face masks when using London’s transport network. He told reporters, “As long as the virus is still with us, and as long as we’re still concerned about the virus being transmitted, we will make it compulsory.”

Compulsory, but not legal. That should be interesting.

Johnson’s original date for his Freedom Day had been June 21, but it was moved after the Indian variant saw COVID deaths total 74 in the week preceding it. In the seven day period up to July 14 fatalities reached 229, putting the Prime Minister under pressure to postpone this Freedom Day as well, but his response is, “If we don’t go ahead now, when will we?”

The school summer holiday period is seen as the best time to relax restrictions and Johnson added that the alternative would be to wait until spring 2022, after the winter flu period.

With so many last-minute caveats now added Nigel Farage told GB News, “Let’s be frank. It’s not Freedom Day, is it? We all know that many of the restrictions will still be in place. There will be little normality in life.” And he warned that the full restrictions could be back again in September once the holidays are over, and the flu season begins again.

This raises the nightmarish prospect that lockdowns by varying degrees are here to stay. Even though deaths attributed to COVID are a fraction of what they were last year.

Back then, people were shocked when Bill Gates and others first floated the idea that the only way out of lockdown would be through the development of a vaccine. But even though several were produced at “warp speed,” with less than complete testing, they have not defeated COVID, and we still have lockdown restrictions.

Suspiciously close to “Freedom Day”, the Conservative government rushed through its legislation to force health care workers to be vaccinated against COVID if they want to keep their jobs. William Wragg was one MP who voted against it, and he later berated Parliament and his own party: “90 minutes on a statutory instrument to fundamentally change the balance of human rights in this country is nothing short of a disgrace.”

And this may just be the beginning of forced or at least coerced vaccinations, as France is discovering.

President Macron has announced that without a COVID passport people aged over 12 will not be able to enter restaurants, bars, cinemas, theatres, and shopping centers or use public transport. Unapologetically he said, “Our choice is simple: to put the restrictions on the unvaccinated rather than on all.”

Immediately afterwards over two million French citizens applied for the vaccine. However, it also led to the recent Bastille Day riot and further protests are planned all across France. More peaceful but even bigger “Freedom Rallies” have already taken place in central London as have smaller ones across the UK.

Like America, people in Europe are divided on whether they think the restrictions are temporary and necessary to help defeat a health crisis, or whether they denote something more sinister and permanent.

In his TV interview Farage argued the latter view: “The idea that we should be grateful to the government that normal life can resume… I rather object to that concept. What right do they have to say that they own our freedom? That’s the premise, here, isn’t it? They own our freedom and liberty.”

As a result of the lockdowns, British people have begun to view freedom as something the government allows them, rather than being their inalienable birthright. And that transition from being heirs of Magna Carta to beholden-on-Boris has happened shockingly quickly.

A survey carried out by Ipsos MORI shows 70 percent want to see face masks continue for another month, 64 percent would like that to remain in place until coronavirus is under control worldwide, and, staggeringly, 40 percent want them worn in shops and on public transport permanently.

Yet the imposition of the lockdowns is beginning to face legal scrutiny. Spain’s constitutional court has just ruled it was unconstitutional for the Spanish government to have imposed lockdown on its citizens under a state of emergency.

And last year a former UK Supreme Court Judge, Lord Sumption accused the British government of assuming, “coercive powers over citizens on a scale never previously attempted.” He described the measures as constituting “the most significant interference with personal freedom in the history of our country.” With restrictions going further than those enacted during war time, or health crises that were “even more serious than this one.”

If it could ever be proven that lockdowns were ultra vires (without legal basis), a government could find itself liable to an enormous number of claims for economic loss as well as human rights and civil liberty violations.

Now that would be a Freedom Day.